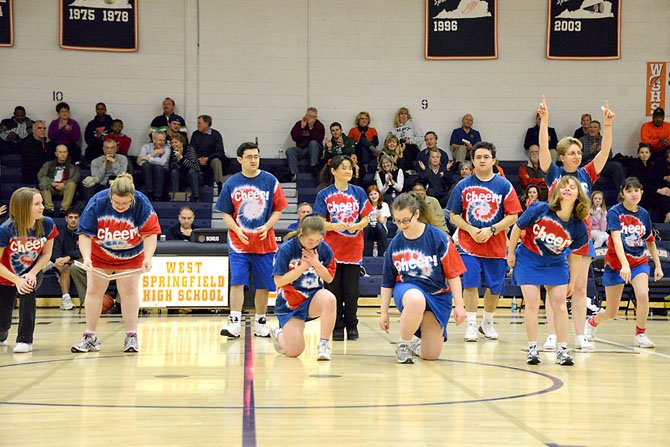 Like many girls, Jacquelyn Hoffmeier of Burke always wanted to be a cheerleader. The 25-year-old, born with Down Syndrome, finally got her chance to perform on Friday, Jan. 11. 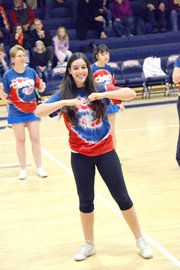 Hoffmeier, along with seven of her Special Olympics teammates, cheered and danced before a crowd of nearly 200 parents and students during halftime at the West Springfield High School girls’ basketball game.

“My daughter was so into cheerleading. She practices two hours a day with her Wii, and as soon as I mentioned creating an informal cheer team, she was ready to go,” said Jay Hoffmeier, Jacqueline’s father and head coach of the Northern Virginia Special Olympics Gymnastics (Area 26) group. “This is so much fun for them. They are pure athletes because they don’t care about anything but the sport.”

Although Hoffmeier had been coaching with Special Olympics for 22 years, his expertise was in gymnastics, not cheerleading, so he started scouting around for someone who had the skills and the patience to coach his team of aspiring cheerleaders. The team members, who range in age from 18 to 36, all have some form of intellectual disability.

“Many people assume that because they are non-verbal, they can’t learn or don’t want to exercise, and that could not be further from the truth,” Hoffmeier said. “They are all so excited about this, and they love their coaches.”

West Springfield High School cheerleaders Alana Corn and Kelsey Kirkman, both 16, volunteered to coach the team, and they have been practicing with them every Sunday night since school began in September. As WSHS juniors, they volunteer purely for the fun of it. They don’t receive school credit. 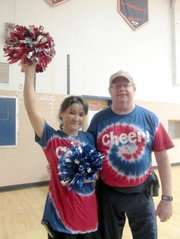 Jay H. Hoffmeier, of Burke, head coach of the Northern Virginia Special Olympics Gymnastics group, with volunteer assistant coach, Keiko Vonack, whose sons, both of whom are autistic, cheer on the team. Their first performance was held Friday, Jan. 11, during halftime of the girls' basketball game at WSHS.

“We wanted to give them an opportunity to do something we take for granted,” Corn said. “They work incredibly hard, and they have so much fun with it. I love to see the joy on their faces when they learn a new move.”

Kirkman said she loves being welcomed by the team. “They get really excited when they see us, because they love cheering,” she said.

“The Olympians and their families are all so excited about the performance,” said Del. Eileen Filler-Corn, Alana’s mother. “We’re proud of her for volunteering.”

When it was time for the halftime performance, the coaches were nervous, but the team was cool under pressure, and seemed thrilled to be in the spotlight. Holding pompoms high, they spread out on the court and began two 40-second dance and cheering routines as if they had been performing every Friday night.

During the second routine, a technical glitch caused the music to begin repeating. But the team was unfazed, and the crowd began clapping to the beat, cheering the team on with their enthusiasm.

“I am so happy for her. This was an exciting opportunity,” said Rebecca Drazmin, Sarah’s mother. “She loves to practice, and she’s getting the experience of being on a team.”

“Look at them. It’s wonderful to hear the crowd cheering for them,” said Keiko Vonack of Springfield, one of Hoffmeier’s assistant coaches, and the mother of Brian and David, twins who are autistic. “You have no idea how excited they are to participate in something like this.”

After the performance, the team received a well-deserved standing ovation.

“This went so well... My daughter can’t wait to perform again,” Hoffmeier said.