‘They Treat Him Like One of Their Own’
Votes 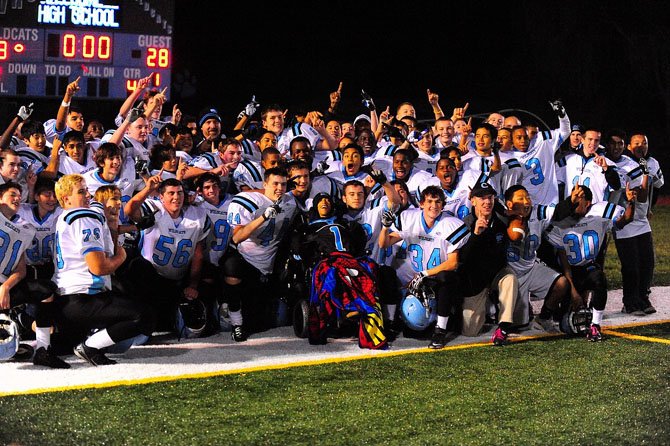 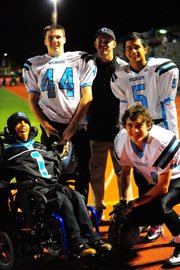 After Centreville’s undefeated freshman football team won its last game of this season, Juwaan posed with one of the coaches, Chris Barron, plus players (from left) Brett Clark, David Leckie and Zach Kehoe.

Not only was Juwaan Espinal’s association with Centreville High’s football teams meaningful to him, it meant something special to the players, too. They learned about compassion, as well as acceptance of someone different from themselves.

“It was a pleasure having Juwaan involved with our team,” said Wildcat Varsity Football Coach Chris Haddock. “He is a special young man who, like many others, loves his high-school football team. His mom contacted me over the summer and I worked out some ways he could be involved.”

Haddock gave Juwaan a football jersey to wear at home and on the road so he could match the team. And Juwaan gave the players his devotion and dedication.

“He waited for us outside the locker room before every game and gave each of the players and coaches ‘high fives’ and ‘pounds’ as we took the field,” said Haddock. “He always had a huge smile on his face, and you could tell how much he enjoyed being a part of it all.”

After one of this season’s games, Haddock gave Juwaan the game ball and had the players include him in the cheer they do after every game. “Juwaan sent me a great e-mail the next day, saying he slept with the ball that night,” said Haddock. “He has physical limitations that don’t allow him to play football, but it is obvious that he loves the game and, most importantly, ‘his’ team, the Wildcats.”

“I think his involvement lends perspective to the kids on the team,” continued Haddock. “We all have gifts to be thankful for each day; and seeing Juwaan and his great big smile helps remind me how lucky I am for the blessings in my life.”

Similarly, Chris Barron, one of the freshman football coaches, was also impressed and moved by the teen. “Juwaan is a young gentleman who is also our No. 1 fan,” said Barron. “When I got the news that he would be joining us this year, I knew it would be a special season. And the players went on to have great friendships with Juwaan, especially Matt Laurence and Zach Kehoe, who spent time with him and made him feel even more a part of the team then he already was.”

Barron said Juwaan would lead the team up to the football field before cheering on the players to victory. “He would be down next to the field for all of our home games,” said Barron. “And he always had a smile on his face when the Wildcats were [playing].”

“At our year-end freshmen banquet, we presented him with a championship sweatshirt like the players got because he was part of our team — part of our family,” added Barron. “Hopefully, he can return next season and make new friends.”

Centreville — Juwaan Espinal, 15, was born with cerebral palsy and is wheelchair-bound. But that doesn’t mean he can’t live a life as full of joy and meaning as possible.

Now 15 and a sophomore at Centreville High, he has a loving family and has been unofficially adopted by both the Wildcat varsity and freshman football teams. And both he and the players couldn’t be happier about it.

“This school has done so much for him,” said Juwaan’s mother, Ibis Espinal-Banks of Centreville’s Singleton’s Grove community. “Both the freshman and varsity teams went out of their way to make him feel a part of them.”

Born at only 5 months gestation, Juwaan weighed just 2 pounds, 12 ounces at delivery. “But he was a little fighter,” said Espinal-Banks. And as he grew up, he always loved sports.

His sister, Shanelle, a 2012 Westfield High grad, now attends Mary Baldwin College. But when she was younger, she played SYA soccer and basketball, plus basketball at Westfield, and Juwaan was her biggest cheerleader. The family later moved to Centreville’s boundary area and, now in high school, Juwaan wanted to be part of a team, too, like his sister was.

“I told him, he might not be able to compete on a team like she did, but he could still be part of one,” said his mother. “So I talked to the varsity basketball coach, Drew Murphy; and Juwaan’s freshman year, he became an honorary team manager, wore a jersey and sat behind the team bench.”

Juwaan was also a huge football fan. He knew Westfield grad Eddie Royal — who went on to become a wide receiver for the San Diego Chargers; and through that acquaintance, he’d developed a love for football.

“So this year, I reached out to Varsity Football Coach Chris Haddock and, with no hesitation, he gave Juwaan a jersey with No. 1 on it and made him co-captain of the first game,” said Espinal. “He also introduced the players to him and gave him the game ball.”

From there, things took off. “Freshman Football Coach Thomas Lamb e-mailed me, asking me to bring Juwaan to meet his freshman team, and they adored him, too,” said his mom. “They adopted him completely and wanted him at every home game and in the locker room for speeches. They won the championship undefeated — and when they took team pictures, the players insisted that Juwaan be in them. They wheeled him to the center of the photo, themselves.”

She said both the freshman and varsity teams went out of their way to make her son feel like one of them. For example, said Espinal, “Juwaan couldn’t make it to the last two varsity games because the weather was too cold for his 46-pound body. So one of the players had his girlfriend Facebook-friend Juwaan and give him the play-by-play. And at the end, she wrote to him, ‘We miss you; the game wasn’t the same without you.’”

The players also made the homecoming dance special for him. Juwaan went with his aide and a friend, and almost all the members of the freshman team, plus some of the varsity players, were there. “They were so loving to him,” said Espinal. “When Juwaan came in, they all went over to see him, take pictures and dance with him. He smiled, laughed and screamed with joy.”

He’s been on Facebook since seventh grade, but only had about 40 friends. Since homecoming, that number has rocketed to 400.

Juwaan’s nonverbal, but very smart, said his mother. “He can nod or shake his head to answer ‘yes’ or ‘no’ questions,” she said. “He also has a communication device to click on pictures and words to make sentences. His wheelchair has switches attached to it and he hits them with his head to operate them.”

He’s now learning to use an electric wheelchair so that, someday, he can “run out” on the field with the team. “That’s his dream,” said Espinal. “He can’t do that alone in a manual wheelchair.”

At school, Juwaan attends some regular classes, plus smaller, slower-paced classes for English, reading and math. “We’re happy with the school, administration and students,” said Espinal. “Centreville High has done so much for him. Some of the freshmen players sit with him at lunch. And when he’s wheeling around school, the team, cheerleaders, classmates and friends say ‘Hi’ to him; he’s very popular.”

He also boasts a 3.8 GPA. “He’s doing well in school and I attribute that to his having all these kids around him, encouraging him and being his friend,” said his mom. “He especially likes science and English and wants to be a sports announcer. Juwaan’s in the communication class at school that does the announcements and in-school TV program and loves it. He did it at Centreville Elementary and Stone Middle School, too.”

Basically, said Espinal, “He wants to be like everybody else; that’s why I wanted him to be included. Whatever’s possible for him, I will make happen for him. As a parent, you want to provide the best for your kid and protect him. But he has a great support system at school — the administrators, teachers, students, coaches, his peers — and that’s what makes a family. They treat him like one of their own.”

He also participates in Best Buddies. “Centreville High was the top school for the most money raised for it,” said Espinal. “And Juwaan won a trophy from the Virginia Best Buddies; he raised more than $2,000 for its October [2012 fundraising] walk. And he got to meet President Obama when he came to Centreville High.”

Before Juwaan started high school, his mother worried about him, envisioning her child sitting alone in a corner. “But the acceptance they gave him at Centreville is just awesome,” she said. “It makes me happy to see it. The parents there should be proud of their children. Juwaan’s so happy, too; he loves school. He wakes up at 5 a.m. and he’s ready to go. I’m so grateful to all of them.”