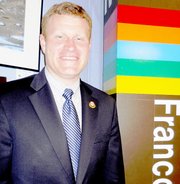 McKay, who is in his second term representing the Lee District on the Fairfax County Board of Supervisors, replaces Arlington County Board member Jay Fisette as NVTC chairman.

“This is a critical time for transit,” McKay said. “We move more people in Northern Virginia by bus and trains than anywhere else in the state. We need better state support to ensure transit continues to be a large part of Northern Virginia’s economic success.”

“In light of the economic and political challenges, there is no time more important than now to support transit as a key transportation and economic driver for our region,” McKay said.

McKay has a strong background in transportation and chairs the Fairfax County Board of Supervisors Transportation Committee. He is a former WMATA board member and also serves on numerous other local and regional boards and commissions, including the Northern Virginia Regional Commission (NVRC), Virginia Transit Association and Virginia Railway Express (VRE) operations as well as the board of the Virginia Associations of Counties (VACO).

The Northern Virginia Transportation Commission was established in 1964 and works to achieve an effective regional transportation system. Its 20-member board includes 13 local elected officials, six General Assembly members and the director of the Virginia Department of Rail and Public Transportation.