Community Center for the Arts possible at Turner Farm. 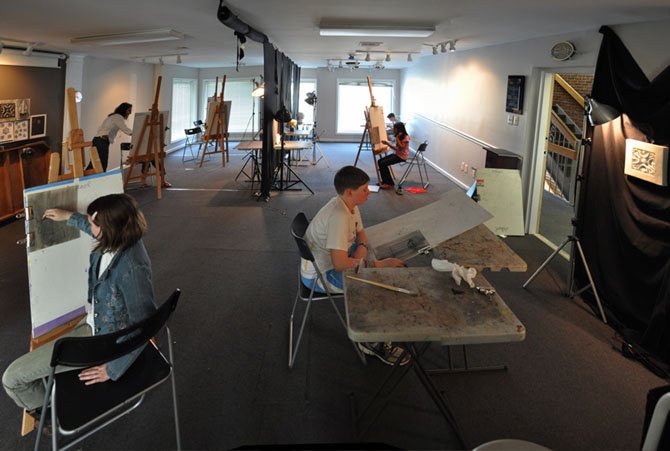 The Great Falls Foundation for the Arts’ school, which they hope to eventually move to a center for the arts at Turner Farm.

Great Falls — The Great Falls Foundation for the Arts was founded in 2007 with the goal of eventually bringing an arts center to the community. Since then, they have run a school, working studio space and a gallery space on Walker Road, all while planning for the future.

The organization is now ready for the next step into the future, creating plans for the Great Falls Community Center for the Arts, which would be located on the grounds of Turner Park.

"Thanks to events like our Great Falls Studios Tour and a thriving community of artists, Great Falls has become known as a destination for the arts," said Mollie Vardell of the foundation. "And the goal of a community center is to make it a full-time destination, not just something that happens over a weekend or for special events."

The foundation started coming up with plans for the center in December 2011, eventually enlisting the help of architect Robert Mobley. The plan is laid out in phases, five so far, that will create a campus-type center, with detached buildings, a garden and other features.

It would be located in the northern section of the property, closest to Georgetown Pike. There would be a small parking lot and road that will go from the existing entrance on Springvale Road between the farmhouse and old barn.

The Great Falls Artists’ Atelier on Walker Road, one of the functions of the Great Falls Foundation for the Arts that they hope to eventually move to a community arts center at Turner Farm.

THE FIRST PHASE, the one the foundation is focusing on at the moment, features a 10,000 square foot building that will have an atrium and artist studio space.

"We’re thinking of the center as not just a place for visual arts, but for performing arts, music, theater and hopefully we can provide meeting space for some of our other local nonprofits that are always struggling to find space," Vardell said.

The building would be just north of the barn, and would also feature an additional section, a 1,000-square-foot gallery space.

The second phase would take the existing barn and turn it into a high-ceilinged space that could be used for theater performances, farmer’s markets, art shows and more.

The third phase would add another 1,000-square-foot gallery wing to the phase one building, giving it wings to the north and south. It would also add the first of several small artist studios. The small studios, which would be about 15 feet by 15 feet, could be used by groups of artists who specialize in certain media.

Phase four would add at least six of the small artist studios, arranged in a horseshoe pattern to the west of the primary building, as well as a garden area.

"We’re looking to connect with local gardening clubs to help fill the garden areas with some of our best local plants," Vardell said. "At this moment, we don’t have any plans for the current farmhouse, that’s something the county and the Fairfax County Park Authority are working on."

She also said one of the benefits of locating the center at Turner Farm is to mesh with the park’s other functions.

"We looked at everything the park offers, and we feel that an arts center complements the existing uses, the equestrian facility, paths, Observatory Park, very well," she said. "Soon people will be able to go to Turner Farm to see horses, jog, visit the arts center and stay to see the stars at night. That’s a pretty unique experience."

Julie Casso, executive director with the foundation, said she hopes the capital campaign, which will kick off in early March, will last from 12-18 months, and they hope to raise about $1.5 million for the first phase of the project.

"We’ve tried to approach this endeavor one step at a time, which is why we’ve stretched the project out in phases," she said. "By going step-by-step, we hope to show our supporters, the county and the community that this thing is feasible, and we’re taking the entire process very seriously."

THE FOUNDATION’S CAPITAL CAMPAIGN will kick off with an Art Night Out Thursday, March 7 at 7 p.m., at a local residence, and they hope to host a tent event on the site in the fall. More information can be found at www.greatfallsart.org/art-night-out-fundraiser.