A Year in Review, Things to Look for in 2014
Votes

Supervisor John w. Foust (D-Dranesville) reflects on most important events in McLean and Great Falls in 2013 and 2014. 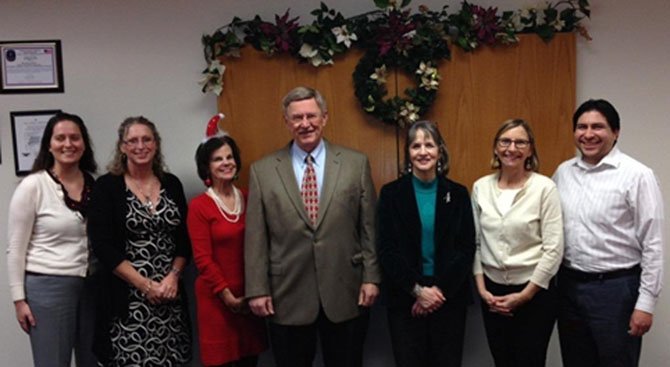 *TRANSPORTATION FUNDING PLAN HB2313 - A significant event affecting the community in 2013 was the passage of HB2313 with bi-partisan support. This bill was the first comprehensive transportation plan passed in Virginia in 27 years.

We now have significant funding available for the numerous transportation projects needed across the County that will provide residents much needed relief from congestion and will help restore the vitality of economic development in Virginia. The Board of Supervisors conducted a Countywide Dialog to solicit citizen input on which projects will be funded and included in the County’s 6-Year Transportation Plan. There is a total of $1.2 billion available from HB 2313 revenues and other funding sources. With significant citizen input, I submitted a list of projects recommended to be funded. There were 47 projects in the McLean and Great Falls areas.

The Board of Supervisors’ decision on funding the final list of projects will occur in either January or February 2014. The selection process is very challenging with so many transportation needs across the County. There are many more worthy projects than funds available to build them. Although we are not able to fund all of the needed projects, any projects not selected in 2014 will be considered again when additional funding becomes available.

I am pleased that in July of this year, the Board approved the first proposal for a commuter parking lot in proximity to a Tysons Metrorail station. The 711-space surface parking lot is located next to the McLean Station, at Dolley Madison Boulevard between Anderson Road and Colshire Boulevard. The owner will pay all costs associated with construction, maintenance and operation of the parking lot and will determine what fees to charge. The lot is expected to be open by the time Metro is operational. It will provide much needed access to the new Metro stations for my constituents. County staff is continuing to work on other Metro station parking opportunities.

The RECenter expansion, including the gym and fitness center, is set to open to the public in December 2014, while the renovation work to the existing fitness area will be completed by February 2015. With the exception of a short period of time when the pool will be closed, the facility will be open during construction.

MAKING THE GRANGE ADA ACCESSIBLE -- For some time now, a number of organizations and individuals in Great Falls have wanted to expand use of the historic Grange building for residents and community groups. In order to make the building usable by all residents, it must be made ADA compliant at substantial cost. I was able to secure Park Authority and County funds in the amount of approximately $500,000 to undertake the necessary interior and exterior upgrades to make the facilities ADA compliant. The Park Authority is expected to begin construction in the spring of 2014.

*FISCAL YEAR 2015 BUDGET -- As in previous years, the Board of Supervisors faces a major challenge to adopt a budget that provides adequate funding for essential services including Education, Public Safety, and Human Services while controlling the tax burden on homeowners.

Since I took office in 2008, we have cut tens of millions of dollars from the County operating budget without serious reductions in the County’s support for these essential services. Virtually all low-hanging fruit has been eliminated.

As we struggle to maintain an acceptable level of services, we face the need for substantial investment and re-investment in infrastructure like schools, storm water management and other public facilities.

This year will be particularly difficult because of the significant deficit projected for our school system, nearly $150 million. To raise an additional $150 would require an increase in the property tax rate of nearly 8 cents, an option that is not realistic. The new school superintendent has published a list of possible cost-saving measures.

I will also continue to work with the community to establish our budget priorities and address our budget challenges. As I have done for the past five budget cycles, I have convened my citizen budget task force. The Task Force will prepare a report that will be presented to me in early 2014. I will share the report with my colleagues on the Board as we develop and adopt the final budget. I will also convene several public meetings to solicit community input on budget priorities prior to budget adoption.

Chief among Dranesville transportation projects is the widening of Route 7 between Jarrett Valley Drive and Reston Avenue. Communities along this corridor have already been involved in the preliminary design process along with VDOT, FCDOT and my office with the "Route 7 Widening Project Working Group" – formed to make sure the vision and concerns of neighboring residents were considered by VDOT project engineers. I expect that high level of community involvement to continue as design and construction activities move forward with the recently obtained funding for this project.

The Park Authority has prepared a draft master plan for the park that consists of two additional rectangular fields, one additional baseball diamond, a dog park, a pavilion, a fitness zone and expanded parking areas for the park and Clemyjontri Park.

The development of Langley Fork presents a great opportunity to expand athletic fields for both children and adults. There is a tremendous demand for them. As the Park Authority’s planning process goes forward, there will be several opportunities for individuals and organizations to express feedback about the proposed development.

There is a significant shortage of housing for seniors in our area, particularly for those with limited resources. I am anxious for construction of the project to get underway.