"I have tons of train equipment, which I have kept since I was 5-years-old," said Larry Aronson, a Herndon resident visiting the train display at Herndon Municipal Center on Saturday with his daughter and his grandson. "It is nice to have layouts like this that can put on a display like this." On both Saturday and Sunday, hundreds of members of the community stopped by to see the model trains. Displaying their model trains were members of the Northern Virginia NTRAK and the Potomac Module Crew. Herndon Chamber of Commerce and the Herndon Historical Society sponsored the train show.

"I would not call these toy trains," said Herndon resident Richard Downer. "They build their individual modules to standards so they will work together," said Downer. Downer has helped develop and coordinate the Herndon holiday train shows from its beginning. The Herndon railroad and the depot closed in August 1968. However, the Herndon Depot Museum, also known as the Herndon Historical Society Museum, opens on Sundays afternoon to display railroad memorabilia, information on United States Navy Commander William Lewis Herndon, for whom the town was named, artifacts from the USS Herndon (DD-198), and from local residents. 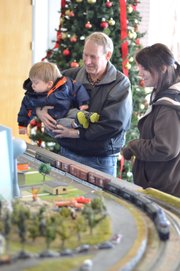 Larry Aronson and his daughter and grandson both attended the model train show on Saturday. The train show lasted throughout the weekend and was on display at Herndon Municipal Center in downtown Herndon.

Trains and railroads have played an important part in Herndon’s history, and the Washington and Old Dominion (W&OD) Herndon caboose and Herndon Depot Museum were open for visitors. Members of Sterling Park Amateur Radio Club were at the Herndon caboose operating a short-wave radio station. "We normally meet the first Wednesday of every month," said club Vice President Jim Purks. Visitors to the restored caboose interior had the opportunity to learn about the important work done by volunteer short-wave radio operators during disasters. "We had a steady stream of visitors, kids enjoy climbing up into the cuplua. We all know a bit about railroad history," said Purks.

The official seal of the Town of Herndon created by Tony DeBenedittis, then an art teacher at Herndon High School, includes a image of the Herndon train depot, representing the Town’s connection with the railroad. It is a connection that significantly affected the Herndon’s early history and development. As the town’s website says "The coming of the railroad in the 1850s spurred Herndon's development."