There was a heavy turnout at Reston’s Lake Anne Plaza on Saturday. Two events were being held in conjunction with each other, one the reception at Lake Anne Reston Community Center for the Gifts from the HeART Exhibit. The second event was the annual "Jingle on Lake Anne Plaza". "It is a wonderful family event," said Reston resident Patricia McIntyre who was helping operate a crafts table with friend Joyce Duke. McIntyre is the owner and director of the Reston Art Gallery & Studios, also located at Lake Anne Plaza. 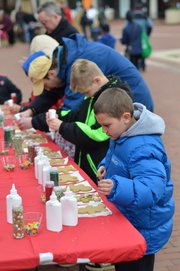 Children had the opportunity to design gingerbread men and other crafts during the Reston Jingle on Lake Anne Plaza on Saturday.

Saturday, Dec. 7 was the 33rd Jingle on Lake Anne Plaza. The event was hosted by Lake Anne Merchants and featured a petting zoo, music, wine tastings, children’s crafts, cookie decorating, and holiday entertainment. The arts and crafts market was open, as was farmers market, which will remain open on Saturdays until Dec. 21. "It is the best holiday celebration in Reston," said Linda Fuller, owner of Lake Anne Florist, which has been serving the community since 1974.

The 15th Annual Gifts from the HeART Exhibition showcased works of art in a variety of media. Proceeds help Cornerstones (formerly Reston Interfaith) continue the work at the Embry Rucker Community Shelter, the Laurel Learning Center and their Community Services Outreach programs. "It is amazing having all these artists here, it is a fun thing to participate in," said Gloria Morrow, Art Exhibit Coordinator for the Reston Community Center.

Both Morrow and Arts Education Director Cheri Danaher helped coordinate the craft show at the Lake Anne Community Center. "There were approximately 40 participants in this year’s show," said Danaher. "It has been very well received and the artists look forward to it." Since the annual exhibit was first held in 1999, Gifts from the HeART has raised approximately $6,000 for Cornerstones.

"My friend let me know about this event. This is my first real community art sale," said Andrea Tembreull, a resident of Mantua. "We got here around 9:30 and started setting up." Among the merchandise Tembreull brought to the community center were stained glass, pottery and ornaments. Deepti Khona, resident of Franklin Farms in Herndon brought candles painted with henna designs. "I also do tattoos for parties and special occasions… Henna is something for all age groups," said Khona.

At noon, Santa Claus arrived via a barge captained by Ken Knueven, President of the Board of Directors for Reston Association. Santa was greeted by crowds of parents and children who waited to have their photos taken with him. "I was flattered to be asked to provide Santa’s sea sleigh this year," said Knueven. "I think the crowds to this event keep getting bigger and bigger."