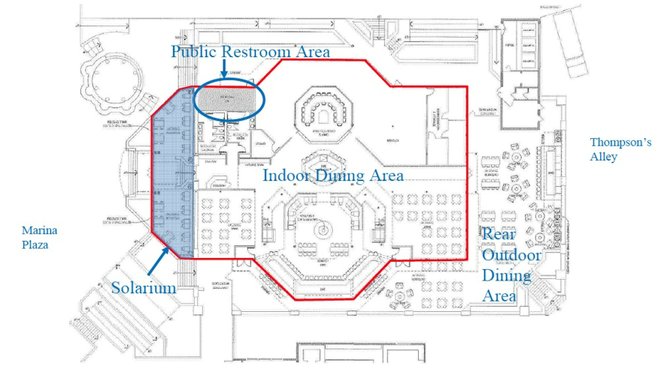 The Food Court as it appears today.

It's been more than two years since the waterfront Food Court shut its doors, the culmination of a long and steady decline over the last decade as vendors abandoned the building and the facility began falling into disrepair. Now the building may have a new lease on life. This week, the Alexandria Planning Commission unanimously approved a new restaurant known as Blackwall Hitch — a restaurant that describes itself as "New American Cuisine."

"Does anybody know what a blackball hitch is?" asked Planning Commission Chairman John Komorowski. "I had to look it up."

According to Mirriam-Webster, the first known use of the expression dates back to 1862. It's a kind of knot used to secure a rope to a hook that originated at the Blackwall shipyard in London. Here in Alexandria, the restaurant will be an attempt to secure a new audience for waterfront dining by hooking them on a new sense of place for the long-suffering Food Court.

"This will give residents and tourists a reason to be behind the Torpedo Factory," said land-use attorney Duncan Blair, who is representing applicant. "This will really open up the waterfront."

THE FOOD COURT is on land owned by the city that was leased to the Alexandria Waterfront Restoration Group in 1986. That was when the Alexandria City Council approved a special-use permit for a food court with nine vendor areas and open seating for 200 people. Seating was later expanded to 350, and the hours were expanded. Several attempts were made to allow live music, but neighbors and elected officials were concerned that would attract more people to the area and create parking problems. In the last decade, vendors abandoned the building and it closed its doors shortly before the Alexandria City Council approved the waterfront small area plan, which envisions a lively and active waterfront that is designed to attract greater numbers of people.

“There are three or four things that I think will make this space more attractive for potential significant users,” said Councilman David Speck last December. “There are people nosing around about it, but they are raising issues.”

After the Food Court closed, city leaders held a series of meetings with the Alexandria Economic Development Partnership and real-estate professionals. In November 2012, city officials met with Realco Property Management Services, representing Alexandria Waterfront Associates, in an effort to attract a new long-term tenant. Meanwhile, city officials were concerned about leaving the building vacant for long periods of time so a Civil War exhibit was installed in the exterior glass panels. Next week, members of the Alexandria City Council will finally consider a special use permit for a 14,000 square foot restaurant with 450 seats — 225 inside, 135 on the rear deck and 60 seats in the solarium.

"We're thrilled to see this enhancement to our dining scene and to know that it will be located in one of Alexandria's most pivotal locations," wrote Alexandria Convention and Visitors Association president Patricia Washington. "Following the lead of the just-opened Waterfront Market, this new participant will strengthen Alexandria's 'extraordinary' brand."

BACK IN MAY, City Council members approved the Waterfront Market — a new restaurant and market by Bittersweet owner Jody Manor. Like the Food Court site, this property is also owned by the city and leased to Alexandria Waterfront Associates. And like the Food Court site, city officials were concerned that the property had been vacant since a furniture store left years ago. So city officials set up a retail location for the Office of Historic Alexandria while Realco looked for a long-term tenant. City Council members ended up approving the permit that allows 54 seats on a portion of the Torpedo Factory and City Marina plaza.

"The waterfront is crowded enough without removing 800 square feet of walking space," wrote Robin Marquis in a letter opposing the outdoor seating. "Allowing a restaurant is one thing. But taking more space away from those who just want to enjoy the outdoors does not seem fair."

Now that the Waterfront Market is open, City Council members are poised to move their attention north toward the long-shuttered Food Court. The restaurant would include an oyster bar, chef's exhibition area and private dining areas. The rear deck would feature an outdoor bar with rollup windows and five outdoor fire pits. Although the building currently has a solarium, the applicant is considering converting it into another outdoor dining space. If the solarium remains, however, the plan calls for retractable glass that would give diners views of the marina and the Potomac River.

"Is is likely that the solarium will be removed?" asked Planning Commissioner Stewart Dunn.

THE MENU WILL INCLUDE seafood, steaks, small plates, flatbreads and craft beers. The restaurant will feature live entertainment inside the building, and the outdoor seats will have background music played through speakers. One potential hurdle the restaurant might face is the massive size and scale of a building originally designed for nine vendors.

"I think it's going to be problematic for them to make an inviting scenario with 450 seats," said Poul Hertel, former president of the Old Town Civic Association. "Converting a building designed to be a food court into a restaurant might be more difficult than they think."

Blair said the restaurant may be open as soon as Memorial Day.