‘It’s Not OK to Turn a Blind Eye to Bullying’

Fairfax High students pledge to stand by each other. 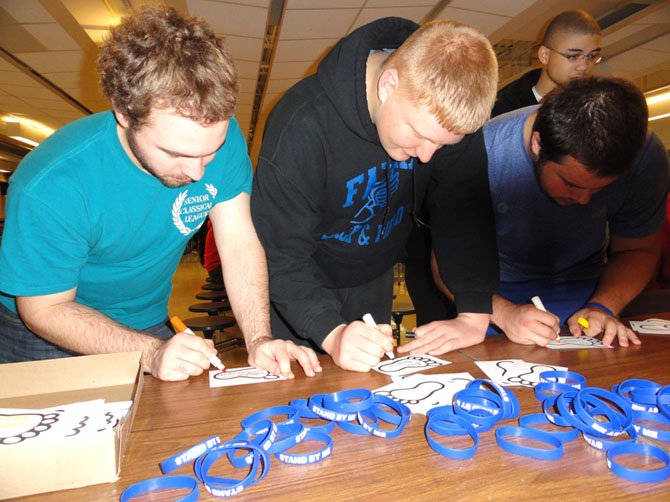 Children of all ages get bullied and bully others, themselves. It’s not true of all children, but it’s true of enough of them that Fairfax County and City of Fairfax schools want to do something about it.

Last year, schools in the Chantilly High Pyramid held a Bullying Awareness Week to address and eventually eradicate this problem. The theme was “Stand by Me,” emphasizing support for the person being bullied, and it was the theme of this year’s week, Nov. 18-22, as well.

But this time, the initiative was expanded to all Cluster VII schools, including those in the Fairfax High pyramid. Besides the high school, Daniels Run, Eagle View, Fairfax Villa, Providence and Willow Springs elementary schools, plus Lanier Middle School all participated. 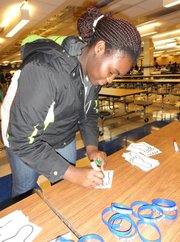 “It’s important for students to stand up for others,” said Fairfax High counselor Donna Leone. “One of the reasons students may not come to school is that they may not feel safe. So by promoting anti-bullying, it makes for a more-supportive school environment and may change the way students act toward one another.”

THE FIRST DAY of Bullying Awareness Week, each school began the conversation around the definition of bullying. All teachers wore blue, “Stand by Me” T-shirts reflecting Fairfax High’s school colors and bearing the words, “No bullying.”

Cluster VII defines a bully as someone who “repeatedly uses words or actions to intentionally cause physical or emotional harm to another person.” During the week, students learned how to handle themselves if faced with a bullying situation and how bystanders can help someone being bullied. They also learned peaceful ways to solve problems.

In addition, students took a pledge stating: “I will not bully others; I will stand up to help others being bullied; I will report bullying to an adult; if I see something, I will say something; I know sticking up for someone is the right thing to do. I will stand by you; in return, I hope you will stand by me.”

Afterwards, they each wrote their name inside a paper footprint and received a blue wristband bearing the words, “Stand by Me.” The written pledge was then prominently displayed in each school, surrounded by the footprints.

At Fairfax, members of the Student Leadership class and the Gay Straight Alliance Club were stationed in the cafeteria during lunches, passing out wristbands and paper footprints. Teachers took the pledge, too, vowing to not tolerate bullying in their classrooms and to help students stand up for others being bullied. They then hung the words outside their classroom doors.

On scrolling announcements on TVs throughout the school, anti-bullying information was presented. It described what cyber-bullying is, plus what it means to visually harass someone, such as writing a person’s name along with sexual remarks or making obscene gestures. And on the last day of that week, all students wore blue in support of the week’s activities and message.

“When students show kindness and compassion toward each other, it makes for a better school environment,” said Leone. “And that, in turn, leads to better academic achievement.”

After taking the pledge, Nov. 21, several students told The Connection why it’s important to educate teens about bullying and its dangers. “Bullying is really bad, and it’s something people should stand against,” said sophomore Dorcas Osei-Adjei.

Senior Sabrina Bastos said, “So much bullying goes unnoticed. So any little thing that makes people think about it will hopefully stop bullying.”

“It’s good to make people aware that bullying exists and that, if they see it happening, they should report it or stop it,” added classmate Selina Cardin.

ALSO A SENIOR, Andrew Orvedahl said Bullying Awareness Week makes a statement: “We’re telling people it’s not OK, instead of turning a blind eye to bullying. Edmund Burke, a member of British Parliament, said, ‘All it takes for the triumph of evil is for good men to do nothing.’”

“I know how it feels to be bullied and how much pain it causes,” said junior Alex Brunner. “So people should realize how their actions and words can influence the person they’re bullying to do something drastic.”

Senior Kyle Wilkinson said, “I’ve always thought keeping people happy should be a priority in one’s life – and putting a stop to bullying would be a phenomenal start.”

“I don’t think bullying’s a big problem in our school,” said senior Amanda McGuire. “But this brings light to it and makes you think more about the things you do subconsciously that may not seem like bullying to you, but really are. It’s also pretty cool that this is being done in the whole [Fairfax] Pyramid, so it’s like a communitywide effort.”

Classmate Howard Kim said there are some students afraid to come to school and unable to sleep at night because they’ve been bullied. “When you bully someone, it hurts people,” he said. “Sometimes they’ll hide it, so you can’t see the harm it does, but it eats them from the inside out.”

Junior Kristina Nguyen said the week was “really beneficial because people don’t know bullying is going on because it can be discreet. But it still hurts the same way. So this lets people know bullying is a real thing and we should treat people nicely because we don’t know what they’re going through.”