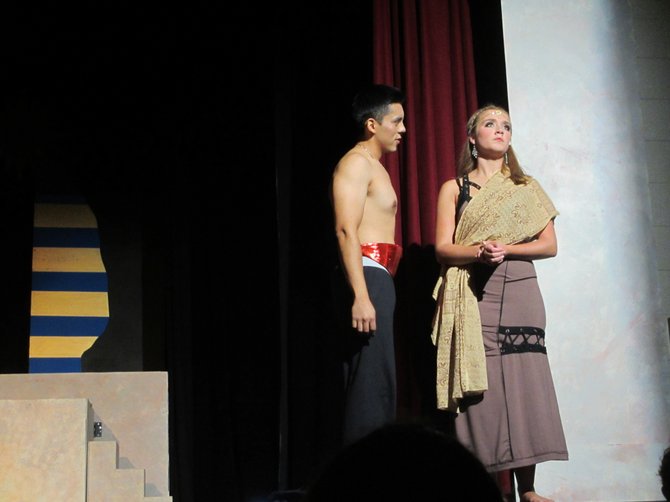 Egyptian captain Radames (Roberto Rivera), although betrothed to the pharaoh’s daughter, is taken in by the spunky slave, Aida (Sarah Chapin). Radames is not aware she is a Nubian princess. Photo by Donna Manz.

Before Egyptian princess Amneris (Christine Foerster) recognizes the self-absorbed life she has lived, she sings—about herself.

Calling the Vienna Youth Players’ production of Elton John’s “Aida” an “amateur” production is like calling the Concorde an airplane, the Beatles singers and Michelangelo a painter. While true, they are all understatements. VYP’s “Aida” dispelled the notion of amateur as being non-professional. The cast, the singing, dancing, acting, costuming and live music were about as professional and well-trained as anything you’ll get outside Broadway. Its six performances—four evenings and two Sunday matinees between Aug. 2 and Aug. 11—were all sold out, and, deservedly so.

The cast and ensemble of the Vienna Youth Players’ “Aida.”

The story, a love triangle in the midst of court intrigue, is set in ancient Egypt.

“This was wonderful,” said Linda Grisano of Vienna. “I love to see so much talent in young kids. I think they have a future in musical theatre. They’re so promising. The acting, the singing the dancing, they’re all wonderful.

The three principal leads see acting and music in their lives. Roberto Rivera, a Screen Actors Guild member, returned to his hometown Vienna theatre as the lead, Radames. An Egyptian warrior, Radames is betrothed to the daughter of Egypt’s pharaoh (played by Christine Foerster of Vienna) but falls in love with a slave girl (Sarah Chapin of Vienna), who, in reality, is a princess herself, the daughter of the Nubian king. While the plot does not have a “happy” ending, it has a satisfying one and, in the hands of popular director Babs Dyer, the musical was a well-constructed montage of song, dance and poignant dialogue. Neal Going and Josh Willis-Jones, with voices as strong and pitch-perfect as the leads, supported Rivera, Foerster and Chapin. An ensemble of singers and dancers rounded out the cast. 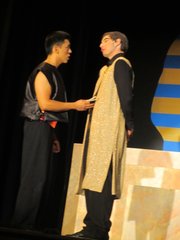 “This was outstanding,” said Lucille Sullivan, of Vienna, who sat in the front row. “Everyone got their money’s worth.

“It was all so professional, the acting, the music. Everything about it was outstanding.”

“Professional” was a term that came up repeatedly in comments. 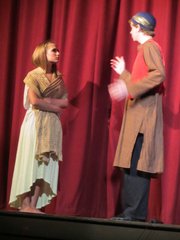 Nubian slave Mereb (Neal Going) pleads with the Nubian princess (Sarah Chapin) not to give her heart to Radames.

Mayor M. Jane Seeman attended two performances; she always makes it to opening night, she said. Noting that she loved the music of Elton John, Seeman said, “these kids are doing a fantastic job … the singing, the dancing, the acting … it’s so professional.

“We’re very fortunate to have the Vienna Youth Players in Vienna.”

John’s “Aida” is a tragic love story set against war, but the play itself offered moments of levity, particularly in the scenes highlighting the self-absorbed character of Amneris before her transformation.

“Like Father, Like Son,” is vintage Elton John, and Rivera and Willis-Jones took ownership of the raucous song.

Chapin and Rivera’s duets were poignant and haunting. When Foerster lamented, it should have been her time, her voice and facial expression exuded despair.

The tragic climax segued into “today.” In a museum, the statue of Amneris stood. Behind her, at the tomb of the star-crossed lovers, strangers come face to face.

If the significance of that moment goes unrecognized, it means you missed one of Vienna theatre’s most sophisticated and ambitious productions.