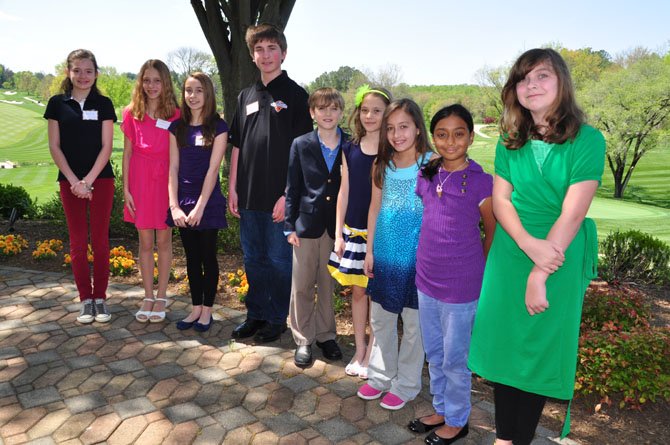 "This means so much to the students in Great Falls, to have their friends and families around to see what they’ve created," said Lisa Spoden, club president. "We had 151 entries this year, which is a fabulous turnout."

Third place: Elena Berrios, "My Life As A Kitten"

"This is a great event because we’re celebrating these kids and their writing," he said. "We’re celebrating it now, and looking forward to what their love of writing will be tomorrow."

Joanne Schilling, a reading specialist at Great Falls Elementary, said the judges have their work cut out for them with the amount of quality entries this year.

"I read some of the poems, and admire the judges for being able to pick some from the wealth of entries," she said. "This is a great partnership we’ve had going for a long time, and we’re hoping it continues for a long time."

The entries were judged by five members of the Great Falls Friends and Neighbors. Pat Kuehnel, one of the judges, said the decisions were very difficult.

"It got to the point where there were seven poems competing for a single spot, and we agonized over our choices, reading them out loud," she said. "We were ‘oohing’ and ‘ahhing’ over many poems that weren’t even recognized today, so we hope the students keep writing and submitting to the contest, because we know they’re very talented."

Keeping in the spirit of writing, Kuehnel also took a moment to pay tribute to E.L. Konigsburg, the Newbery Medal-winning children’s author. Konigsburg won the Newbery Medal in 1967 with "From the Mixed Up Files of Mrs. Basil E. Frankweiler," and a second book "Jennifer, Hecate, Macbeth, William McKinley and Me, Elizabeth" was the Newbery Medal runner up that year.

She won the award again in 1997 for "The View From Saturday," the longest span between wins for one author. Konigsburg lived in Great Falls with her son Paul for the past few years, before passing away Friday, April 19, at the age of 83.

"She said, ‘kids want to fit in, but they also want to be independent’ and her characters’ adventures are certainly proof of this," Kuehnel said. "If she were here today, she would want our poetry winners to continue to create, observe and feel, but most of all follow their dreams."