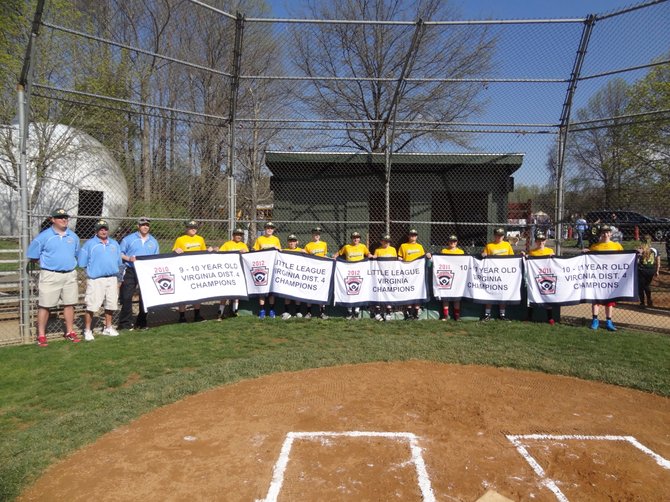 The 2012 Great Falls All Star team holding the banners of the championships that they won while they were Little Leaguers. This photo was taken as part of the Great Falls Little League Opening Ceremonies that were held last weekend as they were honored for their accomplishments.

The Great Falls All Star team was eliminated in the SE Regional Semi-final in a game against Warner-Robins, Ga., that was televised on ESPN2 and played against an unfriendly Warner-Robins crowd of over 9,000 people.

The team has won three District 4 Championships as well as two VA State Championships; their accomplishments are unprecedented, not only for Great Falls, but for any of the Northern VA Little League Programs as well.

As a whole, the team has had 33 wins and five losses and outscored opponents 438 to 78; they held three back-to-back District 4 Championships; two back-to-back state championships; and two Southeast Regional Semi-final Appearances.

The team manager is Ryan Novak and the coaches are Bruce Carton and Jim Volpicelli.

On the Tournament of State Champions website, Great Falls players still own about 12 various offensive records from regional play.