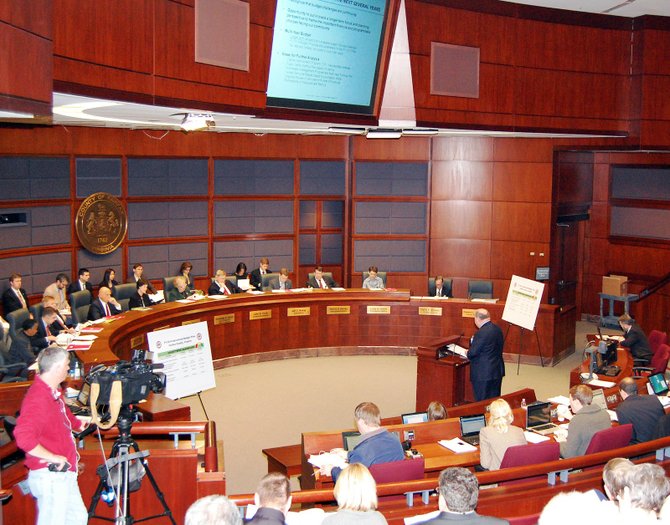 "We as a board spend a lot of time talking about helping people in need, I can only say that when it came time to tax them, they were sadly forgotten."

"Had I voted no, the final rate would have been higher."

By a 9-1 vote, the Fairfax County Board of Supervisors approved a one-cent increase in the property tax rate during its FY2014 budget mark-up session on Tuesday, April 23, which means the average homeowner will pay about $216 more next fiscal year. 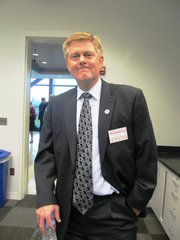 For the first time since 2010, Braddock Supervisor John Cook voted to approve the budget.

THE MARKED-UP BUDGET includes a real estate tax rate of $1.085 per $100 of assessed value, a one-cent increase from the $1.075 rate in FY 2013. The increase is less than the two-cent increase proposed by County Executive Edward Long on Feb. 26.

"This budget is a responsible fiscal plan that reflects our current difficult economic situation," said Fairfax County BOS Chairman Sharon Bulova (D-at-large). "It helps to restore structural balance as we continue to struggle with increasing needs, decreasing revenues, and the impacts of sequestration and economic uncertainty."

Braddock Supervisor John Cook joined his colleagues in supporting the "compromise" budget, the first time the Republican has voted for the budget since 2010. 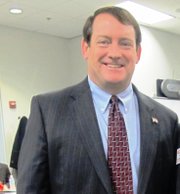 Springfield Supervisor Pat Herrity was the lone dissenter in the boards 9-1 vote for the FY2014 budget.

"It was a tough vote. There are no good, simple answers to the position the county is in. We need economic growth to keep what we have and when it stalls out, that’s a problem," Cook said after the vote Tuesday.

Highlights of the package include:

Increases the Real Estate Tax Rate by one cent, from the current $1.075 to $1.085 rather, than the advertised two cent increase;

Increases property taxes by approximately $216 on the average household;

Creates an $8.1 million reserve to address the impact of sequestration and federal cuts;

Transfers to Fairfax County Public Schools total $1.89 billion or 52.7 percent of total county disbursements. The 2 percent increase is less than the school board’s budget request, but provides funds to address their projected increase in the student population;

Provides no increase in compensation for county employees, with the exception of longevity step increases included in the advertised budget;

In addition, the total number of county staff positions will be reduced by 41, which includes the elimination of 83 positions, offset by 42 new positions.

Cook strongly criticized the Federal Government’s inaction, and noted the impact that had on the Fairfax County budget.

"We should have had an 8 percent growth in commercial real estate this year. Instead we had 0 percent. We wouldn’t be in this circumstance if that growth had occurred. The commercial drop isn’t because our businesses aren’t ready to do business, it’s because they are waiting for the Federal Government to do something," Cook said. "It is a bipartisan failure of the White House and Congress, of Democrats and Republicans."

"Not one person on the board got everything he or she wanted. In tough economic times it’s important for us all to come together and craft a budget together. That’s what we did this year and for that reason I voted for it."

But Supervisor Pat Herrity, one of three Republicans on the board, said the board could have done better, adding that the one-penny increase translates into a 4.5 percent increase on the average homeowner. He noted that increased assessments for townhouse and condo owners mean those residents will see a $700 increase in their tax bills.

"For the first time in recent memory, our citizens are seeing significant tax increases at all three levels of government," Herrity said. "Our furloughed residents do not have the option of raising revenue, they must make difficult cuts in their family’s budgets and that is what we should be doing."

Herrity said that many Fairfax County homeowners are struggling as they try to navigate an uncertain future.

"I am disappointed that yet again we have balanced the budget on the backs of our homeowners," Herrity said. "We as a board spend a lot of time talking about helping people in need, I can only say that when it came time to tax them, they were sadly forgotten."

Cook said he advocated to keep the tax rate at FY2013 levels, but decided that he could be more effective working with his colleagues rather than simply voting no on any proposed tax increase.

"Had I voted no, the final rate would have been higher," Cook said. "By being involved, I was able to successfully exert some leverage on the board to help get the final rate reduced by one penny. Despite some misgivings, I believe this budget is a difficult compromise in a difficult year. That is why I supported it." 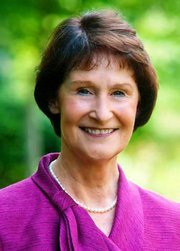 Board of Supervisors Chairman Sharon Bulova

IN THE BUDGET, the board reaffirmed its commitment to work with employee groups to develop and refine an overall pay structure that invests in our workforce and helps in recruiting and retaining high quality employees.

"Our employees have continued to provide quality services to our residents with professionalism and dedication, even in the face of pay freezes and tough economic times," Bulova said. "Their efforts have not gone unnoticed by this body. The creation of a fair and sustainable compensation package for implementation in FY 2015 is a critical element in the long-term stability of the county workforce."

The Board of Supervisors will adopt the FY2014 Budget on April 30. The FY2014 Budget Mark-up as well as other background materials is posted at http://www.fairfaxcounty.gov/dmb/.