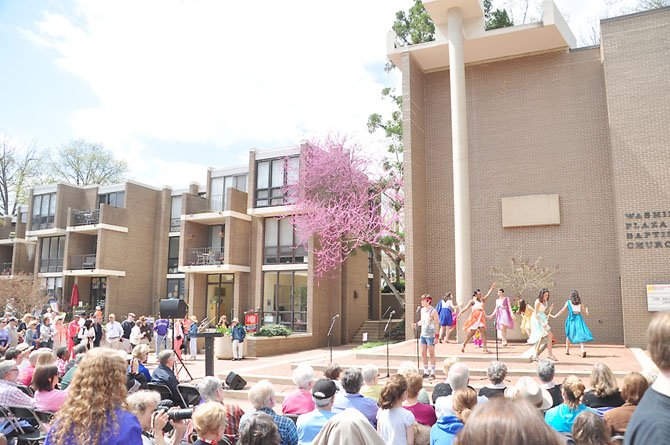 Robert Simon opened up the first weekend of his 100th year at Lake Anne, celebrating with members of the community he founded. Simon, who celebrated his 99th birthday Wednesday, April 10, spent Saturday, April 13, surrounded by well wishers at the 10th annual Founder’s Day Celebration. 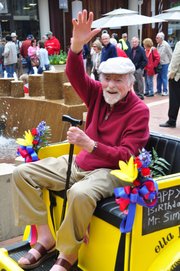 Reston founder Robert Simon waves to the crowd during the 10th annual Founder’s Day celebration at Lake Anne Saturday, April 13. Simon wrote a diary for the day for The Connection [Page 3].

The occasion marked 10 years since the famous bronze statue of Simon was unveiled on a bench next to the lake.

“Ten years ago we dedicated ‘Bronze Bob,’ which is doing very well, and almost every holiday someone decorates it,” said Chuck Veatch, master of ceremonies for the event. “I’ve seen it with birthday balloons, a Christmas hat, bunny ears, it’s become almost as big as a community icon as the real Bob.”

THIS IS ALL ABOUT a community celebrating itself and its visionary founder. We are so fortunate to have him with us,” Connolly said. “There are several kinds of people who build communities. But there aren’t many people who can equal what Bob Simon has done. Bob had the vision, an idea and he stuck with that idea, and he built a community that is unique and so special, and makes such a difference in Northern Virginia and throughout the region.” 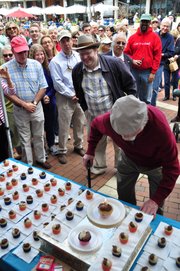 Howell, who moved to Reston almost 40 years ago, praised Simon for a vision that didn’t mesh with current attitudes in the early 60s when Reston was founded.

“What he’s done is create a caring community that is rare and ahead of its time. A community that cares deeply about each other, and about the natural environment,” she said. “When he started this almost 50 years ago, that was revolutionary.”

Bulova called Reston a “real model” for development within the county, as well as the region and beyond.

“People from around the world come to Reston to see for themselves what’s happening here,” she said. “The sign of a really progressive community is that a community can change and work through making change happen. One thing that’s certain is change will happen, and it’s important that people embrace it and make it part of a creative, satisfying process that people can do together.”

THE CELEBRATION also featured a performance from South Lakes High School’s upcoming production of “Xanadu” and a crowd singing “Happy Birthday” to Simon.

“If there’s anyone in this area that deserves a day of celebration and recognition, it’s Bob Simon,” said Emily Shearer, who has lived in Reston for the past seven years. “I’m very impressed with his vision and dedication in founding this community, but I’m even more blown away by the way he still makes time to get out there in the community. I’ve seen him at local festivals and events, and you can tell he still gets a big kick out of it all.”

This year will bring Metro to Reston, and future years will see redevelopment of the village centers and other locations. Eric Frank of Reston said he hopes Simon’s planning days aren’t behind him.

“He laid out a pretty good blueprint for the first half-century of Reston, and from what I’ve heard, he’s got some pretty good ideas for the next 50 years,” he said. “Given his pretty stellar track record, I hope his ideas are the ones we use.”