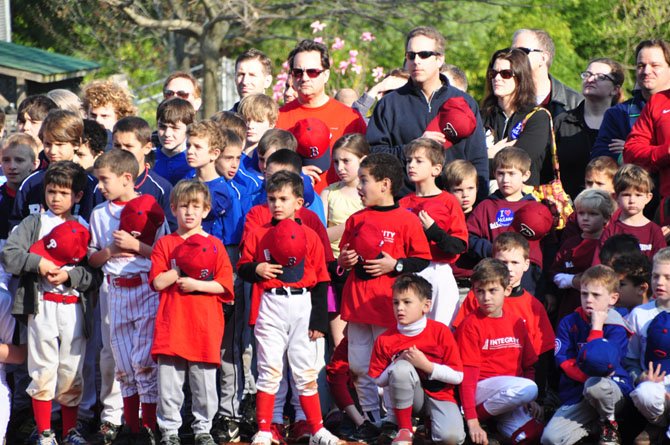 “This marks our 58th year of McLean Little League and our 58th parade, 7th with good weather.”

Hundreds of boys and girls kicked off their 2013 season Saturday, April 13, as McLean Little League celebrated opening day at the McLean Little League Fields. The players, coaches and parents started their morning at McLean High School before marching almost a mile down Westmoreland Street to the fields.

“This marks our 58th year of McLean Little League and our 58th parade, 7th with good weather,” said Jamie Loving, a coach. “As you look around, there are players wearing 95 different jerseys today.” 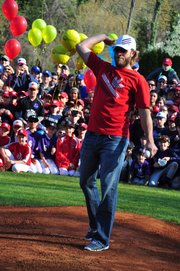 Other local organizations pitched in for the opening day ceremonies. A color guard from Boy Scout Troop 128 presented the flags, and the Spring Hill Elementary Harmony Group sang the National Anthem. Baseball and softball players from Langley High School and McLean High School also walked the route with the little leaguers and welcomed them onto the field.

“It’s nice to see the older players, many of whom came up through McLean Little League before moving onto high school ball, come out and inspire the kids,” said Dan Montgomery, parent of a player. “They all look pretty sharp in their school uniforms, and it gives them something to shoot for as they learn the game.”

The ceremonial first pitch was thrown out by another player that high school and little leaguers alike looked up to, literally. Washington Nationals outfielder Jayson Werth, who at 6’5” stood above almost everyone on the field, threw the first pitch of the season at Field #2.

“I’ve known these kids for a long time, they all have one thing in common,” he said. “They’re ones to lift their teammates, they’re not the ones to get on them, they lift them up by their performance and by getting the rest of the teammates to support them.”

“This award is for inspirational leadership and play during All-Stars competition. I asked Coach [Heath] Simon who we should give this award to, and it took him about 12 seconds to respond,” he said. “Nicole played shortstop and catcher for the team, and batted third or fourth. She has been a leader there, and a leader throughout her years here.”

The league also inducted Holley Remer, Sabrina Moore and Ken Schram into their Honor Roll, recognizing adults with longtime connections to the program. Sue Liverpool was named Volunteer of the Year.