Frying Pan Meeting House has more than 200 years of history. 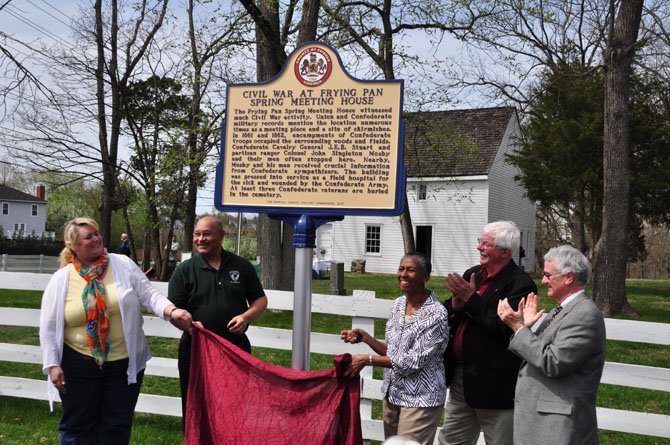 “Since the days of George Washington, the simple white structure here has been serving the needs of the community.”

Maria Harper of Herndon has been to Frying Pan Farm Park with her children many times, but until Sunday, April 14, she had never been to the nearby Frying Pan Spring Meeting House.

“I always remembered it as another random old building near on Centreville Road, I didn’t realize it had historical significance,” she said. “The more I walked around today, the more I learned about the historical figures that were right here on this spot.”

The meeting house hosted an open house Sunday to celebrate the unveiling of a new historical marker on the property. The new marker tells the story of Civil War events that transpired on the property.

Visitors celebrate the unveiling of a historical marker at the Frying Pan Meeting House Sunday, April 14.

“Since the days of George Washington, the simple white structure here has been serving the needs of the community,” said Bill Bouie, Fairfax County Park Authority board chair. “In 1984, the last trustee of Frying Pan Baptist Church deeded the building adjacent to the cemetery and its original two-acre plot to the park authority for preservation.”

In the late 1700s the house was used for church services, burials and prayer meetings. By 1840, the congregation there consisted of 33 white members and 29 black members, many of whom are buried on the property. 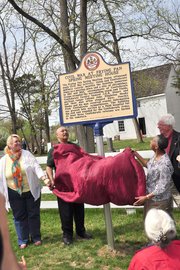 During the Civil War it was used as a hospital for both sides at various times, and several battles took place nearby.

Richard Crouch, a member of the Frying Pan Farm Park board, said that in 1861 and 1862, Confederate soldiers camped in the surrounding woods and fields. Confederate Gen. J.E.B. Stuart and Col. John S. Mosby often stopped there before and after raids and to receive local intelligence.

At least three Confederate soldiers are buried on the property.

“The church was badly damaged during the fighting, and eventually restored by a congregation, which took years to complete,” Crouch said. 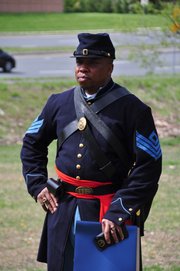 “This land was granted to a local congregation of Baptists for the purpose of rebuilding what was in those days called a meeting house,” said Supervisor Cathy Hudgins (D-Hunter Mill). “Being dissenters from the established Anglican church, Baptists were not allowed to call these sanctuaries churches.”

Civil War artifacts and information about gravesites were on display during the open house, and re-enactor John McCaskill told visitors about the 4th Virginia Volunteer Cavalry Regiment.

“I think it’s fun to discover a small property on a road I drive on every day that has these old burial sites and such a cool history, going back to even before the Civil War,” said Sam Pushan of Herndon. “It’s cool that black and white people were able to worship together in the mid 1800s, when I had always assumed things were pretty segregated.”