Horses and Riders Go in Style at Seneca Valley
Votes

Horses and Riders Go in Style at Seneca Valley

Two-day event attracts competitors from across the country. 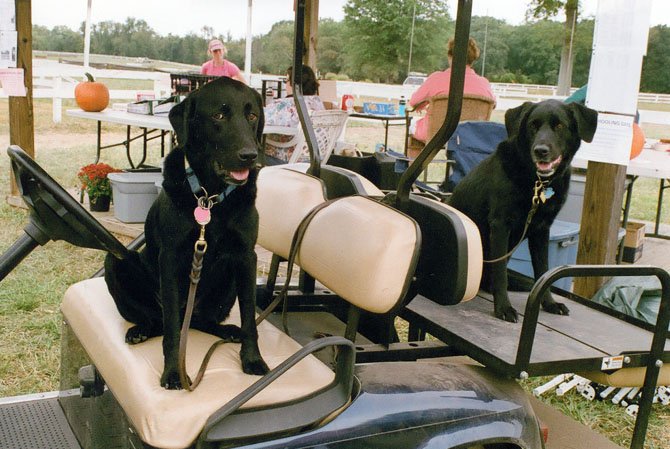 Who’s driving? Darby and Toby were all set to go for a ride. What’s a horse event without dogs?

Potomac — There was an abundance of horse trailers, ranging in size from two-horse rigs to those resembling equine traveling hotels passing through Potomac Village last weekend, all headed to the Seneca Valley Fall Horse Trials at the Kiplinger family’s Bittersweet Field on Partnership Road, Poolesville. 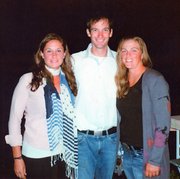 The two-day event attracted riders competing in dressage, stadium jumping and cross-country, many of whom travel frequently from state-to-state competing for ribbons, but also happy to just have the experience and a clean round. Eventing, as it is known in the horse world, has been suggested to be the onset for horses and riders en route to higher competition and a chance for the United States Equestrian Olympic Team.

The enormity of coordinating this event is mind boggling. Without a cadre of volunteers it would be impossible. Three divisions of competition each day demand three separate areas and a multitude of jumps to be built, and/or assembled. This is just the beginning.

Before sunrise, when trailers of horses and riders pull into Bittersweet Field, nearly 40 officials including Kathleen Flynn and Nancy Jones, the show secretaries, have already arrived. They are among those responsible for making sure things run smoothly. This includes five judges, Beth Barritt, Cynthia DePorter, Beth Thorpe, Cathy Tucker-Slaterbeck and Kathy White, who will be on duty for the long haul as will course stewards, a vet, schedulers and announcers.

The Saturday program boasted 140 horses with their riders often competing on two entries in more than one division. Starting times ranged from 8:30 a.m. to after 5 p.m. This is more than a 9 a.m. to 5 p.m. job!

It only takes a stroll through the van parking area (which covers several acres) to see how pampered these horses are and how hard most of the riders work to keep them comfortable. The horses are sponged down, legs are wrapped, their coats brushed and curried and manes and tails braided. It is not only performance that counts in this competition. Horse, tack and rider must be spotless. Some of the more fortunate riders have extra help, often a mom, dad or good friend.

Recently back from London where she competed in the Olympics with the U.S. Equestrian Team, Karen O’Connor, who has previously participated in the Seneca Valley trials, told friends it is her first event since returning to the states. She won two blue ribbons in Open Intermediate to celebrate her home coming. She also graciously mentioned how pleased she was with the new course design.

Saturday’s nine programs were designed for more advanced horses and riders. Sarah Cousins, another familiar name on the circuit, rode Kestral Key and The Robber Baron to first and third places in the Open Intermediate.

A quick glance at out-of-state tags (one huge van displayed California plates) suggests the popularity of the sport and the dedication of riders and sponsors. Without sponsors many of these talented riders would never have a chance to compete on an upper level or in international competition.

The Sunday program, geared for lesser experienced riders or horses, attracted more than 250 entries. Corbin Blumberg could have walked Hastening Opal from her home stable next door for the competition. There were 15 competing in the Novice Junior Year. Opal and Corbin were pinned second, a few steps behind Tappin’ To The Music, ridden by Madeline Fortin. Corbin’s mother, Pam Blumberg, an organizer of the Trials, had to be also “Tappin‘” to the music.

The two-day event was not all work and no play. Dr. and Mrs. Pat Flynn saw to that. A dinner party Saturday night at their Potomac home provided occasion for a number of former Seneca Valley Pony Club riders to have a mini reunion. Their son, Matt Flynn, and Katie Wherley and Lillian Heard, are all Seneca Valley graduates and have advanced to a higher level of competition. Flynn was competing on Chopard an entry owned by Tyler Abell, long a supporter of eventing riders and horses. 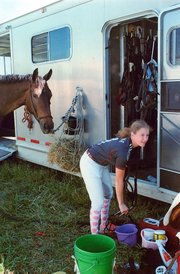 Marley Stone polishes tack while “Alfie” munches from his hay net. Spit and polish are de rigueur throughout the competition.

Barbara Werther, another guest received congratulations for her horse, Stanley, and herself, on their recent win at the American Eventing Championships in Atlanta. By her own admission, “I am a wimp when it comes to cross-country riding.” Wimp or not, she and Stanley were victorious over 50 competitors. Her coach, Packy McGaughan, also at the party, encouraged her to enter the Atlanta trials.

Werther, a Bethesda attorney, mentioned several legal awards. If any of those came her way, she remarked, the one she and Stanley received “would mean the most to me.” And, she added, “Yes, Stanley got his Gatorade.”

Potomac author Neal Gillen and his wife Mary Margaret were there. Neal has just completed his ninth book. No, it isn‘t about horses. “It’s about my 1954 high school adventures in New York,” he said. He and Bess Abell reminisced about her days as Mrs. Lyndon Johnson’s social secretary and “The Lady Bird Special,” the whistle stop train tour Mrs. Johnson took through the south. “I wanted a car for her with a platform,” she said. She got it. Gillen thought it was a good idea to plan a 50th anniversary party commemorating the tour.