Centreville — For Justin Wolfe and his family, the past week has been a rollercoaster of emotions. On Friday, Sept. 7, the state attorney general’s office said it won’t appeal his overturned convictions in a murder-for-hire, death-penalty and drug-dealing case.

Thrilled with the news, his family looked forward to his release from prison. Three days later, Monday, Sept. 10, a Prince William prosecutor said Wolfe will be tried again in that county’s Circuit Court. 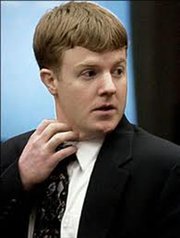 “I’m shocked,” said his mother, Terri Steinberg, outside the courtroom, Monday morning. “We were hoping he’d get bail today. I don’t understand how they can do this. He’s already spent 11 years in solitary confinement for something he didn’t do.”

Just the night before, she’d been so happy, recalling how Deirdre Enright of the UVA Innocence Project had called Friday morning to tell her Virginia wasn’t going to appeal. “It’s been a long time coming,” said Steinberg, of Fairfax. “I was trembling, trying to figure out what to do next. Then Justin called and we were both trying to grasp the reality of it all – that we had finally proved his innocence after 11-and-a-half years of the fight for his life.”

“We’re grateful for Judge Raymond Jackson and the judges of the Fourth Circuit Court of Appeals for giving this case the careful attention it deserved,” she said. “Almost a decade after Justin’s trial, Judge Jackson allowed his attorneys discovery into the prosecutor’s files. [Otherwise], the truth never would have come out.”

Still, said Steinberg, even after her son’s convictions and sentences were vacated in July 2011, he continued to spend another 14 months in isolation waiting for a final resolution. But she never forgets that Dan and Jane Petrole will never again see their son.

“Though we can never get back the past 11 years stolen from my children's lives, we can finally move forward and start to heal,” said Steinberg. “This was an injustice for so many, especially the Petrole family, and my heart goes out to them.”

Monday morning, she was among 20 or so friends and relatives filling a Prince William courtroom. Wolfe’s case had been returned to that jurisdiction from federal court, and defense attorney Ashley Parrish wanted a bail hearing set for his client – who, on Friday, was moved from prison to the Adult Detention Center in Manassas.

Instead, Assistant Commonwealth’s Attorney Rick Conway – one of Wolfe’s original prosecutors – said he intended to retry him. (The case is in Prince William since the murder occurred in that county). Judge Mary Grace O’Brien then continued the proceedings to Friday, Sept. 14, to decide on bail and set a trial date.

Afterward, Conway said, “We’re in the process of going forward with this case.” But he declined to reveal whether the murder-for-hire charge is still in play.

Attorneys from both sides planned to meet Wednesday to further define the issues before Friday’s status hearing. Nonetheless, said Enright, “We’ve reviewed all the evidence and don’t believe there’s a case.”

Wolfe’s father, Michael Wolfe, who lives in West Virginia but works in Manassas, was also disappointed on Monday. “I was hoping they’d announce they were going to drop everything, but I guess they’re going to pursue it. It’s crazy – it doesn’t make sense.”

He saw his son, a few weeks ago, and last spoke with him by phone, Sept. 6. (On Monday, the jail hadn’t yet cleared Wolfe to have visitors). He said Justin was “confident he’d be released soon.”

Despite spending more than a decade in an 8x8 room, “He’s been fantastic through all of this,” said Steinberg. “He read and watched football on TV and had a job cleaning the showers. He also looked after the other [prisoners] as best he could; they yelled to each other through the walls.”

Wolfe’s cousin, Jason Darne, a 1998 Chantilly High grad, visited him in prison every couple months and talked with him on the phone almost every day. “A cordless phone was brought to his cell,” said Darne. Optimistic about a good outcome for Wolfe, he said, “Since he’s always known he was innocent, he knew his family’s hard work [to exonerate him] would eventually pay off.”

Steinberg praised her son’s “incredible legal team” – the lawyers at King and Spalding, the Innocence Project at UVA and the Virginia Capital Representation Resource Center – “without which my son would have been executed years ago. We need to do everything in our power to make sure this never happens to another family again.”

She said Justin was fortunate because that team “uncovered large amounts of exculpatory evidence” that prosecutors never shared with his original attorneys. “No one should lose a son, a father or a husband to a wrongful conviction and sentence of death, and that's exactly what almost happened here,” said Steinberg. “It’s time for this to be over and for my son to come home.”