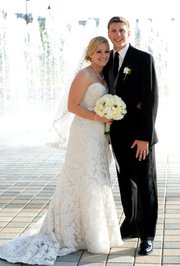 The couple met while students at Elon University in Elon, N.C.

The bride is a first grade teacher in the Fairfax County Public Schools. The groom is an analyst for the federal government in Washington, D.C.

The bride is the daughter of Mr. and Mrs. David Wylie of McMurray, Pa. Her grandparents are Mr. and Mrs. J. Russell Wylie of Washington, Pa., Mrs. John Salter of Gibsonia, Pa. and the late John Salter.

The groom is the son of Dr. and Mrs. Alan MacDougall of Centreville. His grandparents are Mr. and Mrs. Larry MacDougall of Nashua, N.H., Mrs. Alfred Clement of Madison, N.J., and the late Alfred S. Clement.

The bride was given in marriage by her father.

Best man was Steven MacDougall of Alexandria, brother of the groom. Groomsmen were Tristan Kissell, also of Alexandria, Justin McDougall of West Chester, Pa. and Matthew Cobb and Taylor Blunt, both of Fairfax.

After a honeymoon cruise to the western Caribbean, the couple resides in Fairfax.