Ready for Some Football
Votes

Ready for Some Football 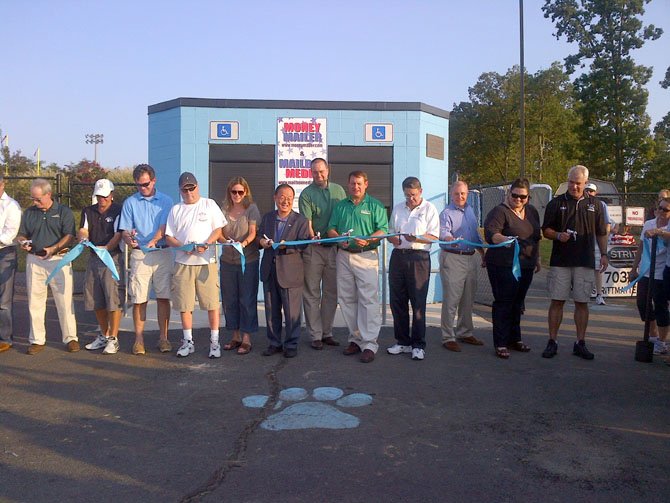 Centreville — When the Centreville High football team beat Lake Braddock last Friday, 28-27, it underscored the Wildcats’ intention to successfully defend their regional title. It was also the inaugural game on their new, artificial-turf field.

Centreville actually raised some $1.25 million and installed two such fields. And before the Aug. 31 game, school officials, contributors and local dignitaries joined to cut their ribbon in a ceremony by the football field’s entrance gate.

“It was just about a year ago when we decided to do this,” said Wildcat Athletic Director Jimmy Sanabria. “Little did I realize how big an endeavor it would be. But this project couldn’t have been done without the entire community all pulling together to put in these two, state-of-the-art fields for the community to enjoy.”

He said Sully District and Springfield District School Board members Kathy Smith and Elizabeth Schultz, respectively, plus Board Chairman Ilryong Moon supported the project, and he thanked them for “thinking of our community.”

Because grass fields must rest, be reseeded and have time to grow for the high-school seasons — and cleats, weather and usage damage them — no one but Centreville has been able to use its practice and game fields. But artificial turf will enable SYA’s young athletes to play on them, too.

In addition, heavy rains will no longer be a problem because the fields’ synthetic material will absorb and drain water. So soggy, muddy fields won’t force games to be cancelled or rescheduled. Artificial-turf fields are also cost-effective because they don’t need the maintenance and materials required by grass surfaces.

To raise the funds needed for the new fields, Centreville sold name-engraved bricks with which it will construct a wall leading to the football stadium in honor of the donors. It also received donations from SYA, plus various companies, organizations, individuals and the school’s Athletic Booster Club. Supervisors Michael Frey (R-Sully) and Pat Herrity (R-Springfield) also found $275,000 for the project.

Friday evening, with new Centreville Principal Martin Grimm participating in the ceremony, Sanabria acknowledged everyone who’d helped make the new fields a reality. He thanked First Virginia Community Bank for working with the school, and Neighborhood Community Services for awarding Centreville a grant. Regarding SYA, he said, “We couldn’t have done it without them and the money they gave us.”

Sanabria also praised the two supervisors, calling them heroes. “Superman Frey and Superman Herrity helped us navigate the political waters and found us funds at just the right moment,” he said. Sanabria then thanked the companies and community members “who really put the kids in our community first.”

These donors included the Carney Foundation and Centreville parent Tom Healy, who Sanabria dubbed a “community member extraordinaire who kept asking, ‘What can I do?’” Noting that the same was true of the Athletic Boosters, Sanabria said, “I just kept asking for more and, somehow, they found it.”

He also expressed appreciation to FCPS Design and Construction personnel who helped put the fields in place in just two-and-a-half weeks. Sanabria said that was the second-fastest artificial-turf installation in the U.S., with the first being the New England Patriot’s turf field.

Last, but not least, he tipped his hat “to everyone who bought bricks and donated money, regardless of the amount. You gave and gave, and I’m honored and proud to give [these fields] to you to enjoy for decades to come.”