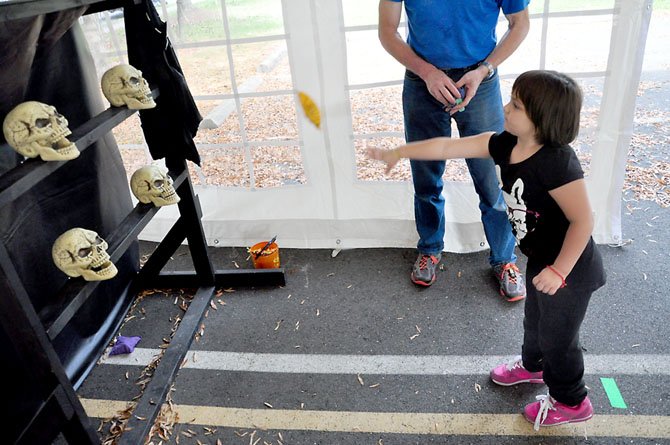 Herndon — Charlie Bowen came to the Bradley Farm clubhouse expecting to see some people in zombie makeup, maybe with some gruesome props. He didn’t expect to spend what felt like the longest 120 seconds of his life jumping at every single sound.

“I walked in, and right away it was much darker than I expected, which took me off guard,” said the 15-year-old Herndon resident. “Then someone just jumped at me, and then a few seconds later, someone else. And before I knew it, I was flinching at almost every single step, just waiting for something else.”

Bowen managed to negotiate the Herndon neighborhood annual haunted house until the end, thus avoiding being named on the “chicken list,” a board at the entrance with a mark every time someone doesn’t make it through. Kara Hackensack of Reston wasn’t as fortunate as Bowen. 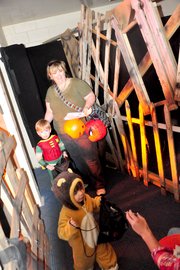 From front, Quinn, 3, Alex, 5, and Rachel Macias of Springfield make their way through the Bradley Farm Haunted House Saturday, Oct. 27.

“My kids had been to this in years past, and they said it was a nice family event, not scary at all,” she said. “They know I’m a bit jumpy, which is I’m sure why they were so eager. I made it to the first section, then I just turned around and went backwards.”

The haunted house is created every year by residents of the Bradley Farm neighborhood, who transform the community’s pool house into a different terror every year.

This year’s haunted house was all about local legends, bringing the scary a little too close to home for some.

“To be honest, I didn’t ask for too much information about what each scene was, I was just ready to get out of there before it got too much,” said Joey Craig, 17, of Herndon. “They did a really good job of making hidden places for people to jump out at you, and it seemed like every time I would guess where someone would come from, they came from the opposite direction.”

The event, now in its sixth year, raises money for Herndon-Reston FISH. Standing for Friendly, Instant, Sympathetic Help, the organization provides emergency assistance to Herndon and Reston residence in the form of rent or utility payments, transportation, furniture and clothing, and more.

Each year the haunted house has grown, and this year’s addition was the Spooky Sprint, where costumed families could run or walk for two miles around Floris Elementary School Saturday, Oct. 27.

Later that day, families with younger children came to the Children’s Haunt, which was a toned-down version of the regular haunted house, where there were more treats than scares.

“From what I heard about the house at night, I’m glad we went to the milder one,” said Kate Irwin of Herndon, who brought her twin 5-year-olds. “They got their treats, I didn’t have to scream, and my husband can come back for the scary one. I think it worked out well for everyone.”