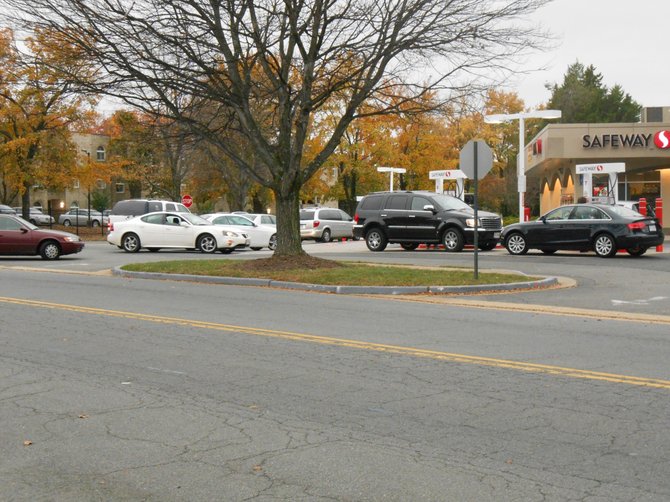 Drivers line up to fill up at the Safeway gas station on Anderson Road in McLean. Cars were five or six deep beginning Friday afternoon through Sunday. Photo by Stuart Moll 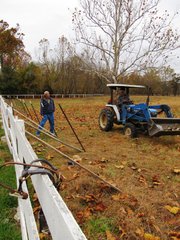 During the storm you can stay informed by signing up for the County's Community Emergency Alert Network (CEAN) text/email updates that will provide weather alerts and other critical information.

Some useful links during the storm:

Emergency Information Blog (you can subscribe for updates by email): http://www.fairfa...">www.fairfaxcounty...

With Hurricane Sandy approaching, Dominion Virginia Power is preparing to respond quickly, as conditions merit. The company has requested additional crews from other states to supplement its restoration workforce. The company reminds its customers to call toll free 1-866-DOM-HELP (1-866-366-4357) in the event of outages or downed lines. Customers may also report an outage through the company's mobile website at http://www.dom.com">www.dom.com by typing in the phone number or account number on record with the company and the last four digits of their Social Security number, PIN or federal tax ID number.

During the storm, if electricity is interrupted: call Dominion's toll-free service number at 1-866-DOM-HELP (1-866-366-4357) or go to http://www.dom.com">www.dom.com. The automated reporting system provides fastest access. Please have your account number or the phone number that is listed on your account ready so you can move through the automated system to report your outage or receive an update.

Fairfax County — As Hurricane Sandy barreled down the East Coast on Sunday, it’s beginning to look like the weather – not politics – will deliver the biggest October surprise this year.

The massive storm is forecast to rip into the Atlantic coast from the Del-Mar-Va peninsula to New England, slamming Fairfax County with tropical-force winds, heavy rainfall of 5-10 inches and localized flooding on area streets, low-lying areas, creeks and streams.

The National Weather Service has issued a high wind watch through Tuesday evening, with the strongest winds likely to occur between daybreak Monday and Tuesday. The area is expecting sustained winds of 35-45 mph with gusts up to 60 mph late Sunday night through Tuesday.

Fairfax County Public Schools announced early Sunday afternoon that all FCPS schools will be closed Monday and Tuesday because of the threat of flooding and high winds.

The Fairfax County Emergency Information Hotline has been activated and is available for residents to call for information about the storm. The number is 571-350-1300. In the case of an emergency you should still call 9-1-1, county officials. Additionally, many government offices and services have been cancelled for Monday.

Many residents took that advice.

In neighborhoods throughout the county, homeowners began preparing for Sandy’s arrival Saturday by stocking up on food, water, flashlights and blankets. Lines were long at many area grocery stores, ATM machines, and hardware and home improvement stores. Home Depot in Reston was cleaned out of flashlights and batteries by mid-afternoon on Sunday.

“Right now, we are baking, vacuuming, washing laundry, and cleaning gutters,” said Vienna resident Marjorie Veiga. “Basically, (we are) trying to do work tasks prior to the possibility of losing power for a few days.”

Steven Rosini of Fairfax was preparing for widespread power outages by taking out his portable generator on Sunday. “We’re taking the storm seriously,” Rosini said. “The temperatures are supposed to drop this evening.”

Hurricane Sandy may well turn out to be an October surprise for voters and candidates too.

Faced with power outages that could last several days, the Virginia State Board of Elections is planning for extended early voting hours. On Sunday, Fairfax County officials announced that absentee voting was cancelled for Monday, Oct. 29.

“Given the expected weather, the county wanted to ensure safety first for voters as well as county employees,” said Cameron Quinn, the County’s chief election official. “A decision regarding Tuesday will be made Tuesday morning when the effects of the hurricane are clearer.”

Many governmental offices and services have been cancelled Monday, Oct. 29. This includes: