Fantasy Pumpkins To Thrill and Delight

Centreville — In his daily life, Noel Dickover is a federal contractor for the State Department. He’s also a science-fiction junkie and an expert pumpkin carver. 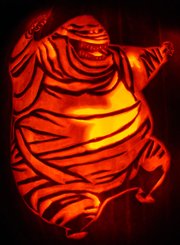 Murray the Mummy from “Hotel Transylvania.”

So as Halloween approaches, when he comes home at night to Centreville’s Westbrooke community, he busies himself designing and carving the 50 or so pumpkins that’ll be displayed in his front yard at 14223 Hartwood Court on Halloween night.

The glowing spectacle attracts 500 to more than 1,000 visitors each year, and word of his creations has spread internationally. Dickover puts his patterns online for free and just asks anyone who does them to send him photos of their finished creations.

“Last December, I was doing a technology event for nongovernmental organizations,” he said. “I was in Bucharest, Romania, and this guy comes up to me and says, ‘I know you — I did your Angry Birds pattern.’ I was just floored by that — that was awesome.”

Dickover’s been designing and carving Halloween pumpkins for 14 years now. It takes him from one to 24 hours to carve each one, depending on the degree of difficulty and complexity. Those he completes earlier are kept in the refrigerator to preserve them. He coats the cut parts with Vasoline and sprays them with a bacterial solution to keep the pattern moist and prevent fungus from growing. 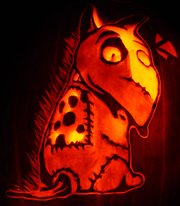 Sparky the dog from “Frankenweenie.”

To view his previous, Halloween creations, go to http://fantasypumpkins.com. To see his current pumpkins, add /2012-pumpkins/ to the end of that Web address.

Dickover doesn’t have to carve all the pumpkins himself. Over the years, he’s shared his knowledge and techniques with his wife, Nam; son Justin, now a sophomore at GMU; daughter Sarah, a Centreville High freshman; nephew Joseph Chang, plus other assorted friends and relatives.

So each year, they all make their own pumpkin creations. And, said Dickover, “It’s nice because the family gets to sit together around the kitchen table and carve.”

“Justin just did a Zombie Thor pumpkin,” he continued. “And Joseph will do the Avengers — Thor, the Hulk, Capt. America, the Black Widow and Ironman — on an 80-pound pumpkin. It’s a complicated pattern that’ll look really cool.”

Dickover often takes his inspiration from the most popular books and movies, so he just finished an “Abraham Lincoln, Vampire Slayer” pumpkin and is currently completing one from the hit movie, “Brave,” featuring Merida and the three, little bears peering around a corner. 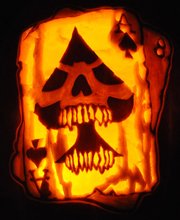 He plans to carve a pumpkin or two from the movie, “Snow White and the Huntsman,” including the bridge troll. Also on his list are a couple patterns from the movie, “Hotel Transylvania,” with Murray the Mummy.

“We have four, 80-pound pumpkins, and I’ll probably do something from ‘Prometheus,’” said Dickover. “It’s insanely difficult. I might also do Michael Jackson as a zombie in ‘Thriller.’”

Not everything is scary, though. “We have a ton of pumpkins for little kids,” said Dickover. “We have fairies and cartoon characters.”

There’ll be pumpkins starring “Thomas the Tank Engine,” plus the characters Toby and Percy, are planned. There’ll also be Scrat from the “Ice Age” movie and a character or two from “Frankenweenie.”

Other creations will include Bean, the villain from the recent “Batman” movie; Frankensmurf; a werewolf and Johnny Depp as Barnabas Collins in “Dark Shadows.” There’s even Troll Face, an Internet meme Dickover describes as “gross-looking.”

“I’m trying to do a ‘Star Wars’ space-battle scene, which is ridiculously complicated,” he said. “This will be a 20-hour carving, at least, with 25 spaceships.” And if he can find the perfect elongated pumpkin, he’ll also sculpt the head of the creature from “Alien.” 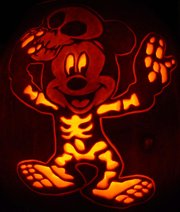 Nam’s contributions include “The Lorax” and the symbol from “The Hunger Games.” Justin, said Dickover, likes to make “cool zombie things and also did a scary Joker coming out of a jack-in-the-box. Sarah already did a Pokémon character and will do some other fun pumpkins, probably anime figures. And I’ll probably also do — from the TV show, ‘Game of Thrones’ — Daenerys with a dragon on her shoulder.”

Toughest, he said, is getting everyone started on their pumpkins, plus figuring out the complex patterns. “And for me, I started later this year because I was out of the country for my job,” said Dickover. “But I’ll take some time off before Halloween so I can have five, straight days of carving.”

He uses special, wood-carving tools from Warren Cutlery to ply his craft. For beginners, he recommends the Speedball Linoleum cutter set, available for $12 at craft stores.

“Sometimes I say, ‘Why am I doing this? This is crazy,’” said Dickover. But it’s all worth it, he said, when people flock to his yard to look at the finished products. “I’m exhausted by then, but it’s actually pretty neat watching everybody see the display and have a good experience,” said Dickover. “It’s a neat way to give back.” 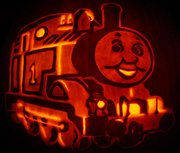 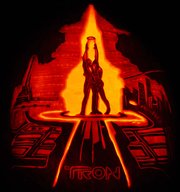 A scene from “Tron.”