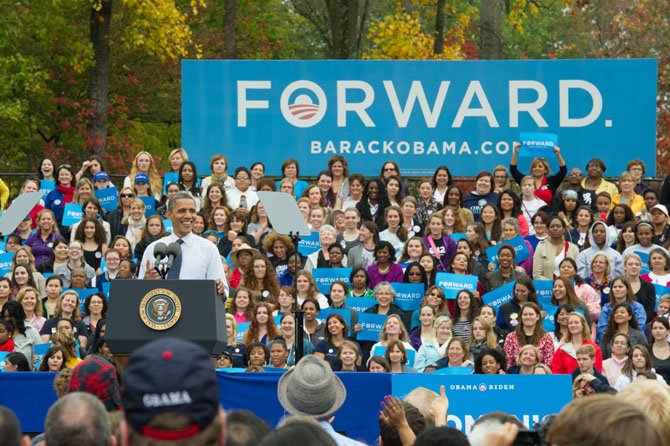 President Barack Obama was relaxed and playful delivering his "Romnesia" quips before a crowd of 10,000 supporters during the rally at GMU on Friday, Oct. 19. Much of his short stump speech focused on issues affecting women and healthcare. Photo by Deb Cobb. 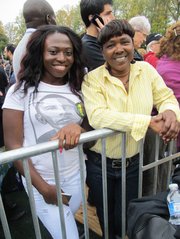 Coworkers Rosemary Osai and Lillie Reynolds of Herndon wait in line to see President Obama Friday, Oct. 19, at his second campaign rally at the school in two weeks.

"He was funny, but we needed that. There’s a lot of truth in that humor." 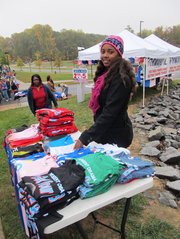 GMU student Vanesa James sells Obama knick-knacks to people waiting in line for hours before the rally on Friday, Oct. 19.

Why are you an Obama supporter?

*The question was asked of people standing in line before President Barack Obama’s speech on Friday at George Mason University. 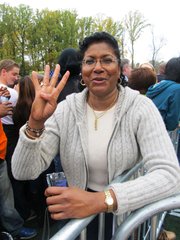 Bernice Griffith of Fairfax "I’m a radiologist, so I know how important things like mammograms and ultrasounds are. You want people to have access to healthcare that’s affordable. You want women, not their employers, to be empowered to make their own healthcare decisions." 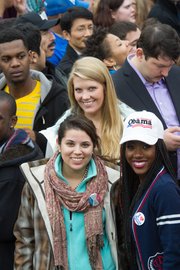 From left—Erika Santoyo and Emily Travis, GMU students, and Kelauni Cook, a recent Howard University graduate "I’m still in school. I’m exactly the kind of person he appeals to...I’m still in college and education and how we’re going to be paying for it is important to me." —Erika Santoyo, 22, a GMU student

"I’m a recent college graduate, and I’m looking for a job. I think President Obama will help the economy. Thanks to President Obama, I can still be on my parent’s insurance plan, and that is so amazing and important to me and a lot of other people my age.

Lillie Reynolds, a single mother from Herndon with four daughters, stood in line for nearly five hours to hear President Barack Obama speak for 25 minutes at a campaign rally at George Mason University on Friday, Oct. 19.

"He was funny, but we needed that," said Reynolds after the president’s quip-filled speech, during which he debuted the catchphrase "Romnesia."

According to Obama, his GOP rival Mitt Romney has come down with a bad case of "Romnesia" because Romney has "conveniently forgotten" his own positions on issues important to women and their families, like saying he’d be "delighted" to sign a law outlawing a woman’s right to choose in all cases.

"There’s a lot of truth in that humor," Reynolds said. "No one here has forgotten one word of what Governor Romney said when it comes to our rights."

Reynolds said she has a very personal reason for supporting Obama. "Two of my daughters are disabled, and I take care of them," she said. "Obamacare is critical to me." 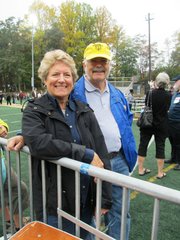 "Romney said he would repeal Obamacare on his first day in office. That scares me."

"I don’t believe for a second that Governor Romney cares about folks like me. We’re the little people to him," Reynolds continued. "He says what you want to hear to make you feel good. He has an entitled, arrogant attitude."

Reynold’s coworker, Rosemary Osei, who recently became an American citizen, said this is the first time she will be voting.

"This is exciting for me," Osei said. "I’ve been paying attention to both candidates. President Obama is the only candidate who seems to care about immigration issues or who appreciates diversity."

Osei, who originally hails from Ghana, said she believes more Americans should take voting seriously. "It’s one of the best things about being an American."

FRIDAY’S EVENT was the president’s second visit to Fairfax in as many weeks, and part of both major party candidates’ round-the-clock campaign blitz through key battleground states, including Virginia, Ohio and Florida.

Although he is still facing a cliffhanger re-election attempt, the president joked with the crowd of 10,000 supporters. Hands in his pockets, he riffed several jokes when the crowd started chanting back the punch line.

"If you say you’ll protect a woman’s right to choose, but you stand up at a primary debate and said that you’d be delighted to sign a law outlawing that right to choose in all cases—man, you’ve definitely got Romnesia."

"If you say that you’re a champion of the coal industry when, while you were governor, you stood in front of a coal plant and said, this plant will kill you—you might have…"

"Romnesia," the crowd chanted back.

"Virginia is a battleground state, and the president knows he needs to get the support of women here," said Toni-Michelle Travis, a GMU associate professor of government and politics and editor of "The Almanac of Virginia Politics."

To that end, the pre-speech line-up included Cecile Richards, president of Planned Parenthood Action Fund and Nan Johnson, a retired teacher from Herndon, who both lauded Obama’s support for issues affecting women.

"When Romney said he didn’t know where to find qualified women during the second debate, that bothered me so much I almost stopped listening," Johnson said. "But then he said ‘If you’re going to have women in the workforce, you’re going to have to be more flexible…’ This is 2012, not 1912. Women having jobs is not a hypothetical."

U.S. Rep. Gerry Connolly (D-11) also got the crowd fired up by referencing Romney’s comments on women in the workplace during the second debate.

"You might remember I’m originally from the commonwealth of Massachusetts," Connolly said, holding up some blue binders. "And I found those ‘binders full of women.’" 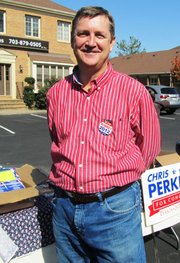 "I’m a small-business owner, and my main issue is that nobody seems to be minding the checkbook. You can blame your predecessor all you want, but I blame [Obama] for his actions in office from day one until now. He’s had four years to reverse the economic trend. His track record with me is poor."

ONE DAY LATER, in a Springfield shopping center off Old Keene Mil Road, Romney supporters were handing out dozens of Romney signs to voters. In a few hours, the group handed out nearly 50 Romney signs.

Darren Williams, who owns Hawkeye Productions, said he believes Romney is the candidate who will stabilize the economy and give Americans a sense of financial security.

"I’m a small-business owner, and my main issue is that nobody seems to be minding the checkbook." Williams said. "You can blame your predecessor all you want, but I blame [Obama] for his actions in office from day one until now. He’s had four years to reverse the economic trend. His track record with me is poor."

Justice Johnson, an 18-year-old Lake Braddock senior, has been making calls for Romney. "I’m worried about the economy and get a job after college."

Johnson, who said he became more interested in politics this year after taking a government class and listening to the candidates, said he was impressed with Romney’s personal business success. "I feel like Governor Romney’s economic policies are the best for business."

Brandon Schall, 24, a recent graduate of Christopher Newport University who also campaigns for Romney, said he doesn’t get caught up in the "partisan hype" of the elections.

"I feel we all have our part to do as Americans. In the end, it’s not jokes and taking shots at each other. It’s not about being a Republican or a Democrat. It’s about doing your civic duty as Americans by voting."