She advises would-be opera stars to take the slow road to fame.

Danielle Talamantes grew up in Vienna, attended McLean High School, and now she sings with the New York Metropolitan Opera and is the soprano soloist for the New Dominion Chorale. She has some advice for would-be opera stars: “Stay home.”

Too many singers rush off to New York City and end up supporting themselves with day jobs they come to hate, she says. Better to take your time until you’re ready for the big stage. 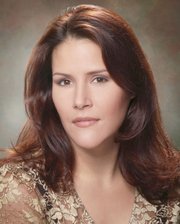 Danielle’s talents as a singer were evident at a young age, but she wasn’t sure she wanted to be a professional. “I was in the madrigal group in high school, and I knew I had a musical gift, but I wanted to go to a big university, go to football games, and have fun,” she says, explaining why she chose to go to Virginia Tech, with its excellent but small voice department. She majored in voice, with Nancy McDuffie as her teacher.

Danielle emphasizes that it was only slowly that her special voice was recognized, by others and by herself. So after college she decided to go down the long path towards a career in vocal performance, attending the Westminster Choir College for a masters in vocal performance and teaching, which she completed in 2001. There she studied with Daniel Pratt, another important mentor and teacher in her gradual path to the opera stage.

The Washington area is blessed with many young, talented vocal artists who choose to make their careers here instead of in New York or elsewhere. She is glad that—after Westminster--she chose to return to live in Vienna, taking a “church job” at her home church, Vienna Presbyterian, while she pursued performing and teaching. She says that a young musician can earn an adequate living here, that it is less expensive than New York, and that the environment is nurturing and supportive. Washington, known as a “choral mecca,” provides many opportunities for soloists to perform throughout the metropolitan area. She also has established an active studio with 20 voice students ranging from adolescents to those in their 60s-and-older.

Throughout her 20s and early 30s she has continued to grow and develop her voice, helped especially by her current teacher, Elizabeth Daniels, who coaches so many young opera singers both locally and nationally. She emphasizes that she seizes every possible opportunity to develop her voice. Recently an important learning and performance opportunity was participation in this summer’s Music from Marlboro festival, where she was resident for a month, working with other musicians in a give-and-take atmosphere of constant learning. She relished the opportunity at Marlboro to “give the music all the attention it deserves, since we usually do not have time to really do that in the real world.”

After growing through all of these learning opportunities she is now bursting onto the national (and international) opera stage. The way to success for her has been through the competition circuit. She says, “There is no one way to do it. Some singers are successful with summer programs like Tanglewood and Santa Fe. But the competition circuit—as jaded as it can sometimes be—puts you in front of the ‘movers and shakers’ of the opera world. I entered lots and lots of them.” In 2006 she won the competition of the National Association of Teachers of Singing, which brought not only a nice financial award, and also a fully sold out debut concert in 2007 at Carnegie Hall, a big break.

In 2008 and 2009 she traveled abroad (to Peru and Berlin) for competitions, and took first place in the Opera San Jose competition. Most importantly, one of the judges in three of the competitions was from the Metropolitan Opera, and “out of the blue” in the spring of 2009 she was invited to come to the Met to audition, something that almost never happens. In 2011 she was contracted by the Met as Principal Artist for the 2010-2011 season, covering in Strauss' Ariadne auf Naxos and again for the 2012-2013 season in Wagner's Parsifal.

So the message to young singers is “take your time and develop your voice and musical talent gradually and fully.” Do not rush to the stage. Ms. Talamantes spoke of some of her friends who went to New York, could not support themselves fully by singing, and had to take one of the many “day jobs” available to artists—a path that can lead to frustration and burnout. She is happy to have taken the slower path that is now paying off. The voice is an instrument that only matures, for women, in the mid-30s and for men a bit later, and--with careful attention to vocal health and technique—can stay at its peak for 20 more years.

If you would like to hear her soon, come to the performance of Carmina Burana at the Schlesinger Center in Alexandria on Oct. 28 at 4 p.m. where she will perform with the New Dominion Chorale under the baton of Tom Beveridge. Also performing is the Select Ladies Ensemble of the Fairfax High School Chorus. It should be a wonderful concert.