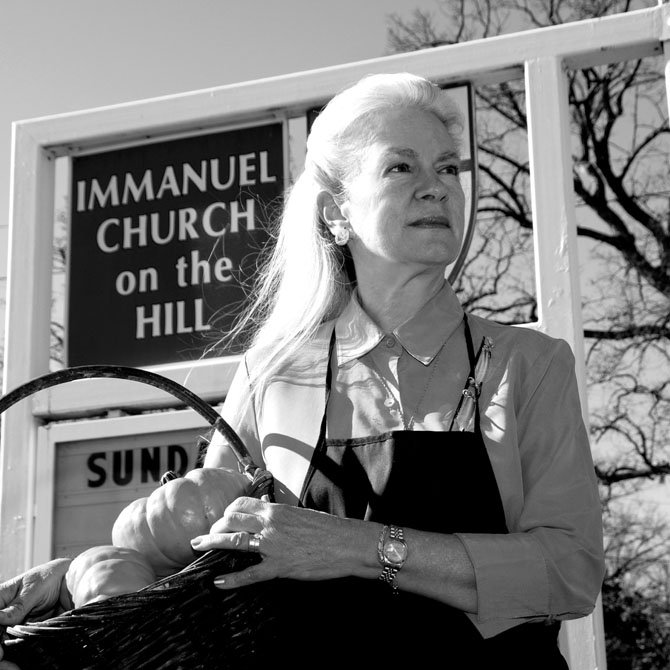 Alexandria — It all began almost 20 years ago when Immanuel Church on the Hill (ICOH) at Quaker Lane and Seminary Road received an offer of pumpkins, initially a quarter-truck load, to be sold by the church with the proceeds to be shared with the program that grew the pumpkins on a Navajo reservation in New Mexico. Five women took on the challenge. The vestry approved and dedicated all proceeds to charity. That was a fateful decision. It allowed the ICOH Pumpkin Patch to become the second most successful patch among the more than 1,200 patches run by churches across the nation. It is probable that many of the Pumpkin Patch’s diverse customers would be less likely to buy pumpkins were the profits to remain at the church.

Wendy John was one of these women. But as things typically evolve in voluntary organizations, John’s activism soon put her in charge of the program. Her charismatic, smiling leadership, hidden behind the Pumpkin Lady’s apron, slowly increased sales from that quarter-truck load to five truck loads in October 2011 at the Patch. The tale of ever-increasing sales from 10,000 pounds to almost 200,000 pounds (100 tons) this past fall is an example of pure business success. How does one sell 100 tons of pumpkins in less than one month?

It was the first Sunday morning in October 2011 at Immanuel Church on the Hill on Seminary Road. Parishioners arrived for what has become known as the Mass on the Grass, a service held on the church grounds. They wore work-in-the-garden clothes to the service. In front of the church stood two semi-trailers, their back doors open awaiting the parishioners. After the service, they unloaded some 80,000 pounds of pumpkins in two or three hours. So began the annual fall rite of the ICOH Pumpkin Patch. This rite of fall has been performed for 20 years and will be repeated this year.

Over the years, John added other merchandise to be sold at the Patch. Part of the logic of adding other goods to be sold was the realization that the proceeds would go 100 percent to charities. Furthermore, the anticipation of more than just pumpkins would draw repeat customers to the patch. To make this part of the enterprise viable, John encouraged parishioners to make and provide craft items, cookies, cupcakes breads and soups. A few years ago, one parishioner began making Apple Crisps to be sold. The arrival of the Crisps has become a major event at the Patch. Early customers always ask when the delicious pies will arrive. They buy all that are made, over 500 last year. An assembly line of parishioners now prepares the Apple Crisps.

Parishioners contribute well over 1,000 hours to make the patch a success. The 1,000 hours refers to the number of person-hours needed just to staff the Patch while it is open to the public. Uncounted are the many more hours that go into management of the Patch, making goodies, and coordination of the volunteers. An intense publicity effort of placing press releases in regional newspapers, the Internet, on storefronts and signs on lawns has resulted in the Patch becoming an annual event for people who live far from Alexandria. News editors accept the releases because they know the charitable focus of the Patch.

Living Legends of Alexandria is an ongoing 501(c)(3) photo-documentary project to identify, honor and chronicle Alexandria's Living Legends. The project was conceived by artist-photographer Nina Tisara to create an enduring artistic record of the people whose vision and dedication make a positive, tangible difference to the quality of life in Alexandria. This is one of a series of profiles that will appear this year.

Most of the parishioner-volunteers, of all ages, have never held sales positions, thus requiring prompting and encouragement to make the Patch experience as pleasurable as possible for its customers and the volunteers. Volunteers gain from the many social interactions that occur at the Patch. Customers, even repeat ones, are encouraged to buy through the reminder that “it is all for charity.” Visitors to the Patch also are told that the Navajo tribe benefits from the sales. Families with children and camera in tow are told that the volunteers will be glad to take photographs of the kids and their parents — no charge. This total effort is designed to draw people of all ways of life to the Patch, not just members of ICOH and not just Alexandrians.

Where does the money go? First, the funds are split with those who provide the pumpkins at no charge to the Patch. The remainder goes to charities, mostly local groups. Approximately $500,000 has been donated to charities over the last dozen years. This year’s installment is double that which was donated a decade ago. What happens to the few leftover pumpkins? A large-animal rescue shelter down Interstate 95 picks them up to feed their animals. The Patch is a no-waste operation.

The ICOH Pumpkin Patch is a wonderful example of people coming together to do good work, a lot of it, under excellent leadership, to great effect. This year is also a milestone in John’s career as the Pumpkin Lady. She has initiated planning for her second retirement, a task almost as large as running the Patch.

Her successes in both professional and family life speak to her entrepreneurial spark. Her drive and charisma reflect her background and put the Patch on the road to success as a major contributor to life in Alexandria. She is a Living Legend.