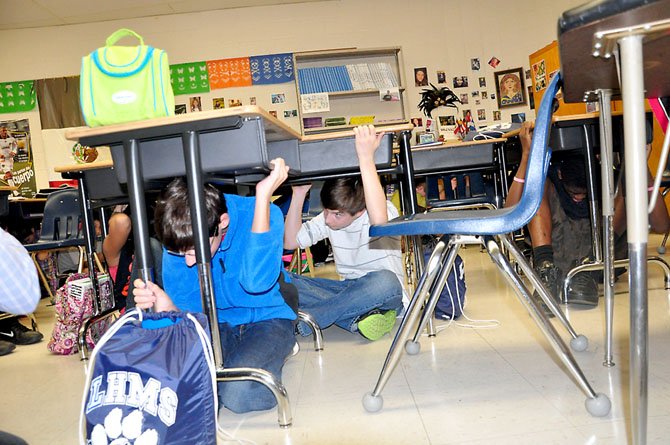 Reston — Students at Langston Hughes Middle School participated in the U.S. Geological Survey’s ShakeOut Thursday, Oct. 18, to prepare themselves in the event of another earthquake like the one that shook a large portion of the east coast on Aug. 23, 2011.

"After last Aug. 23, the County dusted off some old manuals that hadn’t been used in a long time to see what kind of drills would prepare students to be safe during an earthquake,” said Principal Aimee Monticchio.

Just after 10 a.m. Thursday morning, Monticchio’s voice came over the PA system, when she informed the students about the “tremors” that were being felt. Students then performed the “drop, cover hold on” maneuver, getting below their desks and holding onto the legs to minimize chances of being injured by debris.

SEVENTH GRADER Jordan Majoros said it felt “a little claustrophobic” ducking under a desk for so long, but if it was a real earthquake, it would be worth it to stay safe.

Eighth grader Ashley Salavarria said the knowledge would have come in handy had she known it last August.

“When the earthquake hit, I was at Giant, and we saw a bunch of bottles crash down and signs fall, and we had no idea what was happening,” she said. “My little sister was crying, and we all went outside to see what was happening. Now I think I would know what an earthquake felt like, and I’d be more prepared.”

USGS Director Marcia McNutt spoke at the school after the drill, and explained more of the logic behind the drill.

"When I was in your classrooms today, what I saw were bookshelves, clocks on the wall, and things that could fall and hurt you when the building starts to shake,” she said. “Now it’s very unlikely that this building will come down during an earthquake, but there are lots of loose things around that could hurt you, which is why it’s so important to drop, cover and hold on.”

Students had been practicing the drill all morning, and many felt that doing it over and over again would help make it an instinctual reaction should another earthquake strike.

“I think I would drop, cover and hold on automatically now,” said Joseph Letteri, an eighth grader. “It was surprising to learn just how much damage can be done over such a big area.”

Mike Mahoney, of FEMA’s Building Sciences Division said that the geology of the east coast makes the effects of an earthquake more widespread than they would be on the west coast.

“On the west coast, it’s sort of like pushing a mattress, there’s some give to it, and you won’t feel the movement as far away,” he said. “But on the east coast, it’s more like a table, solid, without much give to it, that’s why this quake was felt over such a large area.”

MANY STUDENTS said they found that analogy helpful.

“I think that’s a good thing to know, when it comes to something like earthquakes, that can do so much damage, knowing is half the battle,” said eighth grader Leo Sainati. “I enjoyed learning about how the tectonic plates rub together, and think if something like the earthquake happens again, we’ll all be more prepared.”