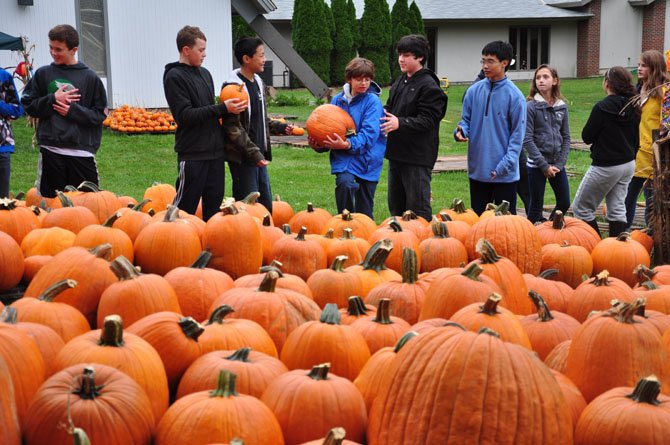 The large green lawn in front of St. Thomas Episcopal Church in McLean had a few splashes of fall color added Sunday, Oct. 7 as dozens of volunteers helped unload a truck full of pumpkins for their annual charity pumpkin patch. 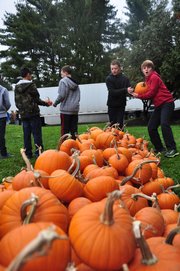 Volunteers spread out in different lines to unload the pumpkins, smaller ones were handed from person to person to be placed on the pallets all over the lawn, while bigger ones were loaded onto wheelbarrows and wagons for transport to their pallets.

“I’d never thought about how heavy pumpkins are before, but when you’re passing hundreds of them down the line, you start to notice,” said Ryan Smith, 14, who came to volunteer Sunday afternoon. “But it is cool to watch the yard get filled up with all these pumpkins so fast, I think we’ve done good work as a team.”

This is the fourth year for the pumpkin patch, which raises money for charities such as Share of McLean, the Falls Church-McLean Children’s Center, the FACETS Hypothermia Shelter program and the Samaritan Ministry in Washington, D.C.

“We got the idea from Emmanuel Episcopal Church in Alexandria, they’ve done it for 20-25 years,” said Rev. Stephen Edmondson, pastor at St. Thomas. “Last year we went through about three-quarters of a truckload, and we were able to raise around $5,000.”

The church received a full truckload of pumpkins this year, up from three-fourths of a load last year and half a load in years past. The pumpkins come from a Navajo Reservation in New Mexico, which shares the profits from the sale with the church on all pumpkins sold. All unsold pumpkins are donated to an animal refuge site, where they are used as feed.

“We’re sort of unique in that we don’t charge by the pound, but by the size category, it’s the same price for the small and large pumpkins, even though they vary in exact weight,” said Alison Pruitt a member of the church, and part of the publicity committee for the sale.

Volunteers will be manning the church’s pumpkin stand from 11 a.m. to 7 p.m. Sunday through Friday, and from 10 a.m. to 6 p.m. on Saturdays all the way to Halloween. For pumpkin shoppers out early or late, the church puts out an honor box for payment after hours.