Senior Whitmire has led Titans to a 12-4 record. 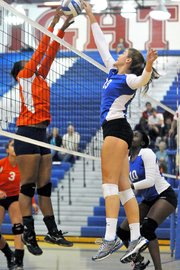 Alexandria — Inside the gym at T.C. Williams High School there are banners displaying the championship history of each of the school’s athletic programs. The Titans volleyball banner is empty, however, as teams have yet to win even a district title.

In 2010, TC’s lack of hardware was something that caught the attention of then-first-year head coach Michael Burch. Three seasons later, with senior Kate Whitmire leading an improved supporting cast, members of the T.C. Williams volleyball team feel they have a chance to eliminate some white space on their banner.

TC entered its Tuesday match against West Springfield as the No. 3-ranked team in the Northern Region Volleyball Coaches Association top 10 poll, behind only Stone Bridge and Woodson.

“Every position has been a little bit improved, overall,” Burch said after Tuesday’s match. “We’re consistent in our setting, we’re consistent in our passing. … We’ve seen we can play with everybody and I think the kids just buy into [what we’re doing]. They’re like, OK, don’t make an error, get it in, help each other out, so I think they just buy into the philosophy.”

A major reason for the Titans’ success is the performance of Whitmire, a 6-foot-1 outside hitter who is committed to James Madison University. According to stats from the Washington Post’s Web site, Whitmire, a four-year varsity starter, leads the Washington, D.C.-metro area in kills with 329, including 30 against West Springfield. She can also perform away from the net as she is second on the Titans in digs.

Burch said Whitmire has matured into a team leader and tries to take over matches, rather than worrying about upsetting her teammates.

“She’s gotten a lot smarter,” Burch said. “She’s moving people around on the court, she’s calling some of her own plays. We’ve given her a little bit of leeway to be more of an audible quarterback. I have to admit, I’ve been pretty impressed with her leadership.”

Whitmire said a desire to win has helped the Titans succeed.

Senior outside hitter Sydney Trout had 11 kills against West Springfield and has helped shoulder some of the offensive burden.

“I think Sydney has stepped up this year,” Burch said on Tuesday. “Before today, Sydney was hitting .250. Last year, she was under .100, so Sydney has been that complement now to Kate. We don’t have to rely so heavily on Kate.”

T.C. Williams lost to Lake Braddock, 3-2, Oct. 4, dropping the Titans' district record to 1-2. T.C. Williams will travel to face Yorktown at 7:15 p.m. on Tuesday, Oct. 9. Burch said the loss to West Springfield can help the Titans down the road as they try to earn one of the top seeds in the Patriot District tournament.

“[The Titans] know that we’re not going to fly under the radar,” Burch said. “You’re the third-ranked team in the region, you’re not going to sneak up. [Opponents aren’t going to say] we don’t have to worry about T.C. Williams, they can’t play. … As long as we finish in the top three and get a good seeding in the tournament, that’s all we’re looking for. Would it be nice to win the regular season? Yeah, but you don’t put a banner up for regular season.”