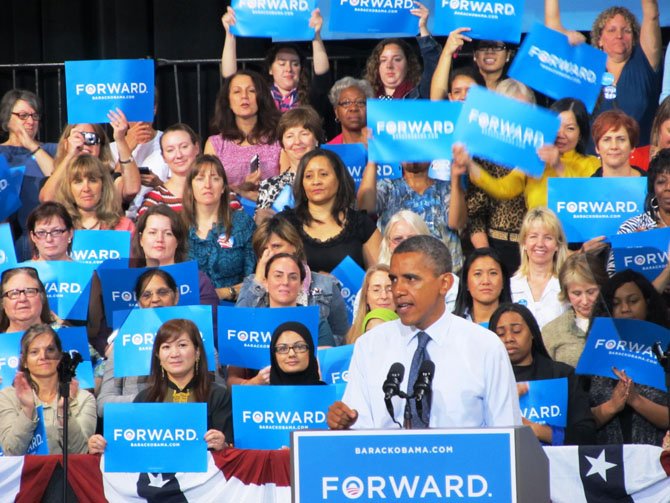 Fairfax — After a bruising debate with GOP challenger Mitt Romney, President Barack Obama did some boasting Friday, Oct. 5 at a campaign rally at George Mason University.

Buoyed by good economic news — AP reported in the morning that the U.S. unemployment rate fell to 7.8 percent last month, dropping below 8 percent for the first time in nearly four years — Obama was joking about Big Bird and Romney’s political pivots during the debate.

“My opponent has been trying to do a two-step and reposition, and got an extreme makeover,” Obama said, drawing cheers and laughter from the crowd of 300-plus students and teachers.

“But the bottom line is his underlying philosophy is the top-down economics that we’ve seen before. He thinks that if we just spend another $5 trillion on tax cuts that, yes, are skewed towards the wealthiest, if we get rid of more regulations on Wall Street, then our problems will be solved,” Obama said. “Jobs and prosperity will rain down from the sky. The deficits will magically disappear. We will live happily ever after.” 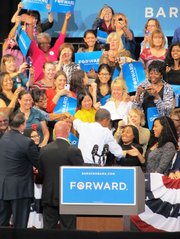 Speaking before a friendly, enthusiastic crowd of supporters, the president took some sarcastic jabs at his opponent.

“[Romney] said there’s no way that he’d close the loophole that gives big oil companies billions each year in corporate welfare,” Obama said. “Ending tax breaks for corporations that move jobs and profits overseas? He’d never heard of such a thing. Who knew? Who knew?”

Obama reminded the crowd that when Romney was asked specifics about cutting spending and reducing the deficit, he went after public television.

“So for all you moms and kids out there, don’t worry, someone is finally getting tough on Big Bird. Rounding him up. Elmo has got to watch out, too. Governor Romney plans to let Wall Street run wild again, but he’s going to bring down the hammer on ‘Sesame Street.’ It makes perfect sense,” Obama said, as dozens of people in the audience jumped up to wave their Big Bird stickers. 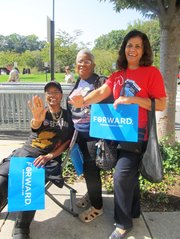 He drew shouts of “amen,” “we love you,” and “thank you,” when he started talking about women's issues and the “stark choice the women of Virginia are facing in this election.” He boasted about the benefits of Obama care.

He said the new healthcare laws have secured new access to preventive care like mammograms and cancer screenings with no copay, no deductible, and no out-of-pocket cost for more than 20 million women.

“Now, before this new law, many health care plans charged high deductibles or copays for these preventive services, or they just didn’t cover them that all. According to one study, more than half of all women put off the care they needed because of that,” Obama said, shaking his head. “How many of you have gone without the care you needed or the checkup you knew just because you were worried that the insurance copay would go too high, and you couldn’t afford gas, or groceries, or your kid’s new soccer uniform?”

“I don’t think a working mom in Arlington should have to wait to get a mammogram just because money is tight. I don’t think a college student in Fairfax or Charlottesville should have to choose between textbooks or the preventive care that she needs. That's why we passed this law, and I am proud of it. It was the right thing to do, and we are going to keep it,” Obama said, drawing applause after each line.

“He was great today,” said Annandale resident Jane Wilson, who brought her daughter Sarah, 10, to the rally. “She was very excited about the whole experience.” 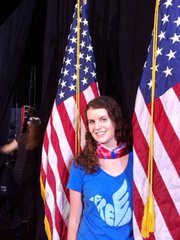 South Lakes High School student Kate Badgett said meeting President Obama at the GMU rally on Friday was the "highlight" of her year.

“There is something to be said for a man who came from the middle class like us. He understands the issues we live every day,” Wilson said.

“I thought his speech was really empowering,” Sarah Wilson said. “You could believe what he was saying.”

Kate Badgett, a 17-year-old South Lakes High School senior, came to the debate with her mom, Beth. She said education and women’s rights were important issues for her.

“I wish I could vote,” Badgett said. “Education impacts my life every single day. I have brothers in medical school, and I am planning on college, but the cost is scary. I believe President Obama will work to make education affordable to everyone,” Badgett said.

“He’s right. We’ve come too far to turn back now,” Badgett said, echoing one of the more sober talking points in Obama’s speech.

“I have seen too much pain, seen too much struggle, to let this country get hit with another round of top-down economics. One of the main reasons we had this crisis is because big banks on Wall Street were allowed to make big bets with other people’s money on the line, and now Governor Romney wants to roll back the rules we put in place to stop that behavior? That’s not going to happen. That is not going to happen,” Obama said.

“So, one month. Just one month from tomorrow, Virginia, you’re going to step into a voting booth, and you are going to have a very big choice to make.”