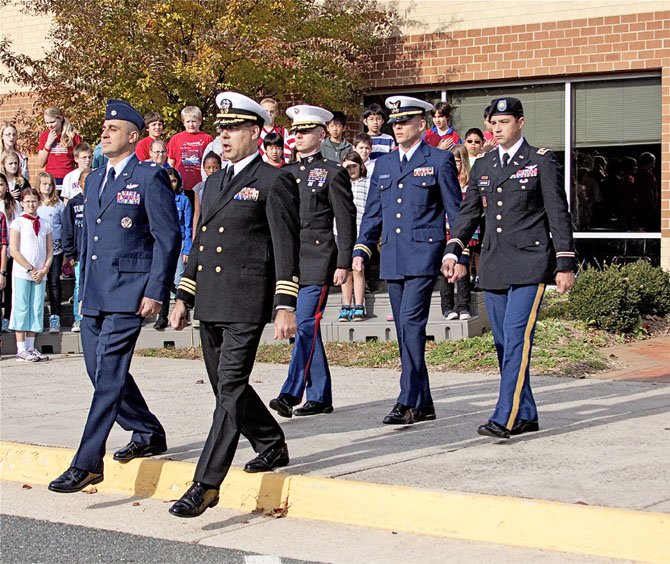 Armistice Day. November 11, 1918. The day when hostilities ended on the Western Front of World War I and the day that ultimately gave birth to our Veterans Day Observances. Originally the day set aside to officially honor our fallen military heroes, it has become the time to not only honor their sacrifice, but to recognize all those who served and all who continue to serve.

How do you keep this tradition alive for generations to come? You get the next generations to recognize its importance, and get them involved. And that’s exactly what’s happening at Sangster Elementary School in Springfield, as the school hosted a Veterans Day memorial event right outside their front door to a large and enthusiastic crowd on Monday, Nov. 12.

The school’s Military Spouses Club is leading the charge. “This is our second year in what we want to see become a school tradition,” said club member and school Assistant Principal Allison Jankovich. Jankovich was quick to credit all the club members, especially Stacy Cheshire, who took part in organizing this year’s activities. “Everyone pitches in to get this accomplished,” said Cheshire, “all the military spouses, the school administration, and, of course, the kids.” Cheshire says there are over 100 military spouses in the school’s club.

Sangster Asst. Principal Allison Jankovich applauds the efforts of the color guard and the school's fourth grade Hand Bell Ensemble for their performances during the school's Veterans Day ceremony.

The ceremony began with the National Anthem, sung by the fifth and sixth grade chorus under the direction of music teacher Josh Sullivan. Music teacher Ann Rollins directed the fourth grade Hand Bell ensemble, who performed to perfection a patriotic number entitled “Americans We.”

One veteran in the crowd noted the unusual make-up of the color guard. “It’s not every day you see a color guard made up of officers,” he remarked. When your children attend the school, and your wives are part of the school’s Military Spouses Club, it becomes a bit clearer as to why those officers came to accept this particular duty. The color guard included members of the Navy, Army, Air Force, Marine Corps and the Coast Guard—a true representation of the American armed forces. Commander Dom Flatt, US Navy, addressed the gathering with remarks about the importance of the day, reminding them of the need to keep remembering, especially as the last surviving veteran of World War I had passed away just this year. Flatt then called out the orders to the Color Guard, and the American Flag was respectfully raised outside the school to the salutes of all in attendance.

It is not difficult to detect the military influence on any of the students at Sangster Elementary. After Commander Flatt dismissed his color guard, Assistant Principal Jankovich did the same with the assembled students—and they responded with military precision equal to the visiting officers, marching quickly and in order back to their classrooms. Well, maybe there was a little more laughing in the ranks than would ordinarily be seen during a military parade.