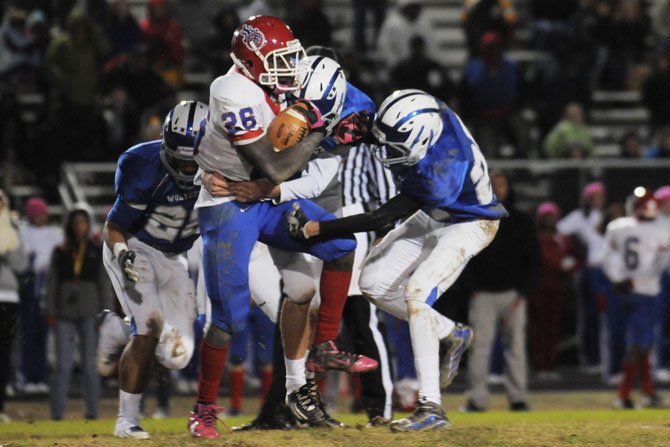 Mount Vernon — The West Potomac football team, missing its starting running back and quarterback due to injury, went to overtime against T.C. Williams and came out on the short end.

The Wolverines lost to the Titans, 13-10, on Nov. 2 during both teams’ regular season finale at West Potomac High School. The Wolverines walked to their locker room after the game while rival T.C. Williams celebrated on the Wolverines’ home field. Later, however, West Potomac head coach Jeremiah Davis offered a reminder that even though it was the Titans who won Friday night, the Wolverines have a reason to look forward.

TC finished with a 5-5 record and did not qualify for the playoffs.

The Wolverines expect to receive a huge offensive boost with the return of running back Demornay Pierson-El. After suffering a leg injury against Woodson on Oct. 19, Pierson-El sat out against West Springfield on Oct. 26. He said he could have played against T.C. Williams, but coaches held him out for precautionary reasons.

Pierson-El is a major part of the West Potomac offense. According to stats from the Washington Post’s Web site, the junior has rushed for 1,537 yards and 22 touchdowns, and has 10 catches for 127 yards and three scores.

"It gives the whole team confidence," linebacker Ethan Hall said of having Pierson-El in the game, "because … he is the offense."

Without Pierson-El, West Potomac was limited on offense against T.C. Williams, but still held a 7-0 lead late in the game thanks to a 50-yard touchdown run by quarterback Caleb Williams. The senior signal caller would leave the game with a hip pointer, however, but is expected back for the playoffs.

While the offense struggled against TC, the West Potomac defense limited the Titans’ spread offense to one touchdown in regulation.

Davis said cornerbacks James Harkless and George Williams played well for the Wolverines, as did defensive back Tyrik High.

"I think we played our best team game we … played all season," Davis said. "I’m beside myself with the effort that was given and it started with a great week of practice. … We haven’t been in a dogfight since [beating] South County [on Sept. 14]. Either we’re getting blown out, or we’re blowing somebody out or 50-, 60-, 70-yard runs are [happening]. Today, we were in a dogfight. We showed we can step toe-to-toe with folks."