Hearing All Sides Of the Election
Votes

Hearing All Sides Of the Election

Chantilly — The presidential election came to Chantilly High last week when representatives of the Obama and Romney campaigns, plus the Libertarian and Virginia Constitution Party, spoke at the school.

They addressed some 500 government students, all seniors, in the school auditorium. Each made brief opening and closing statements and answered questions from both teachers and students. Moderating last Thursday, Oct. 25, was social studies teacher Charles Demek. 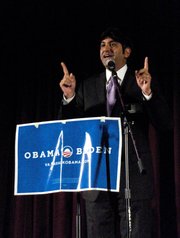 Bill Redpath, a noted author and at-large representative of the national Libertarian Party, spoke on behalf of the Gary Johnson campaign. And Mitch Turner, chairman of the Virginia Constitution Party, represented the Virgil Goode presidential campaign.

Turner: “If we elect a Democrat or a Republican, in four years our government will be bigger, our debt will be bigger and things will be worse. Neither the Democrats nor Republicans look at the rules and apply them correctly. Virgil Goode will limit the powers of government; the others govern like your stuff belongs to them.”

Chopra: “We inherited difficult economic conditions born out of a decade of neglect in investments in our country. President Obama believes in digital infrastructure and for us to collaborate to solve the problems of health care, education and energy. And he will cut tuition growth by 50 percent, reduce our dependence on foreign energy and create more jobs.”

Redpath: “We believe people should be able to live as they choose, as long as they don’t do anything harmful to others. We believe in limited government spending, tax reduction and an increase in civil liberties. Some $222 trillion dollars is the difference between what we owe and what we have. Only the Libertarian Party will put us on a fiscal path.” 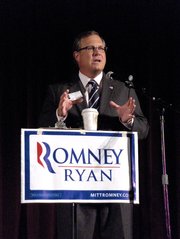 LeMunyon: “Fundamentally, Obama and [U.S. Senate candidate] Tim Kaine believe a larger government is better. But you have a choice to limit federal government to the things it does best and let the states do the same. If you think the economy works best when the government is the referee, then Romney and [vice presidential candidate Paul] Ryan are your candidates.”

Q: What does your candidate see as the number-one threat to national security and what will he do about it?

Turner: “The national debt; we can’t sustain it or maintain our place in the world with it. Virgil Goode is going to cut government and balance the budget.”

Chopra: “President Obama believes our first priority is to protect the people. A vibrant security posture is important, but a U.S. economy built from the middle out is equally important. Solar-panel installation and other renewable-energy sources are also important. And we must be vigilant about our security at home, including our cybersecurity.”

Redpath: “The national debt. It’s not really that hard to balance the federal budget; we could do it if we freeze government spending for six years. We should cut 43 percent of the federal budget immediately and give block-grant Medicare payments to states. And instead of paying Social Security taxes, people could invest [that money] in private accounts.”

LeMunyon: “The biggest threat is the Iranian nuclear weapons program. Iran supports governments around the world that have killed Americans. Obama has been slow to put in sanctions. We had more in the 1980s than today.”

Q: The unemployment rate is now 7.8 percent and millions of Americans are without jobs. What will your candidate do to ensure jobs will be there when these students enter the workplace?

Chopra: “The unemployment rate is actually at or below 5 percent for those with college degrees. That’s why President Obama has worked hard to make sure you have the skills you need to compete. There are more than 3 million unfilled, open jobs in the U.S. because employers can’t find people with the skills they need. Construction-industry jobs are coming back, now that the housing market is coming back. Obama wants to have 100,000 teachers with skills in science, technology, engineering and math — and that’s just the beginning.” 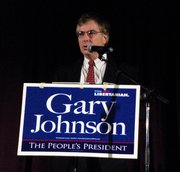 LeMunyon: “I agree. If we continue on this path, eventually 40-50 percent of federal revenue will be from taxes and borrowing. I don’t think that’s the direction we ought to go.”

Q: How can your candidate ensure the U.S. can provide for its people while staying financially afloat?

Redpath: “Turn Medicare and other welfare programs into block grants to the states to reduce people’s reliance on the federal government. Give more power to the states and reduce federal spending.”

LeMunyon: “Virginia has a balanced budget. Government can do it, but you have to set priorities in Washington and say no to some people. Amend the U.S. Constitution to require a balanced federal budget so your children and grandchildren won’t accumulate a huge debt. Plus economic growth — put more people back to work so they’re paying taxes, instead of just collecting benefits.”

Chopra: “[Former President George] Bush cut taxes and increased spending. The federal government helped bail out the states to help their budgets. A group of experts — including public and private CEOs —– said we needed about a $4 trillion [debt] reduction. We’ve already cut $1 trillion, and Obama plans more by going back to the tax cuts of [former President Bill] Clinton — which created 23 million jobs. But unless we constrain the growth in the cost of health care, we won’t be able to get this done.” 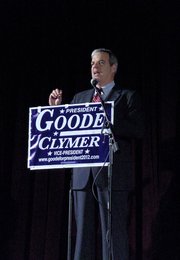 Q: What can be done to make college more affordable to these young people here?

LeMunyon: “College costs are related to what goes on, state by state. Make sure out-of-state students pay full freight. It’s up to individual states to do so.”

Turner: “The reason college tuition is so high is because of the federal government. We need to have competitive college costs; Goode would veto that spending.”

Chopra: “We need innovation in higher education, so President Obama made a one-time, $2 billion investment in online courses, and universities are embracing it. We thank [Virginia] Gov. [Bob] McDonnell who used recovery funds to create the first, online database to tell students what university programs and courses will earn them the best salaries and return on their investment.”

Redpath: “We agree with Mr. Turner. We’re opposed to state subsidization of higher education. We should finance college through equity investment. People would get a certain percentage if they paid for their school and got through with zero loans.”

Q: Many students in this room were either born elsewhere or their parents were. What is your candidate’s position on immigration?

Turner: “Goode wants a near-total moratorium on immigration. When you’re going through tough times, you don’t open your doors and feed the whole neighborhood. We need to get immigration under control so that, later on, we could have a lottery for people with the skills we need. We need to get the unemployment rate down first.”

Chopra: “My father came to this country because President [Lyndon] Johnson opened the doors. He eventually got three patents and became a success. Our economy is built on entrepreneurs who came from other countries. Nearly 50 percent of Silicon Valley companies were started with at least one immigrant among their founders. Obama has moved forward on the Dream Act, but immigration has dropped 40 percent in this culture of hatred [from the conservatives]. The pie in America needs to grow, not be redistributed. Obama is committed to making it happen, but he needs cooperation from people on the right.”

Redpath: “Gary Johnson wants to make it easier for immigrants to come to America. He wants a work-visa program with a one strike, you’re out program for circumventing it. Immigrants have been wonderful for this nation.”

LeMunyon: “Republicans aren’t anti-immigration. We need to make legal immigration easier and illegal immigration harder. Make it easier to process them and keep faith with the immigrants who’ve done it legally.”

LeMunyon: “I hope you will vote, if you can. If you think federal government’s role should be limited, Mitt Romney’s your candidate.”

Redpath: “Most people will vote for the lesser of two evils. But it doesn’t have to be that way; I’m voting for Mr. Johnson.”

Chopra: “This is about whether we have a smarter government working for you. If you support President Obama for a second term, we’ll build an economy that’s sustainable and strong for us and for generations to come.”