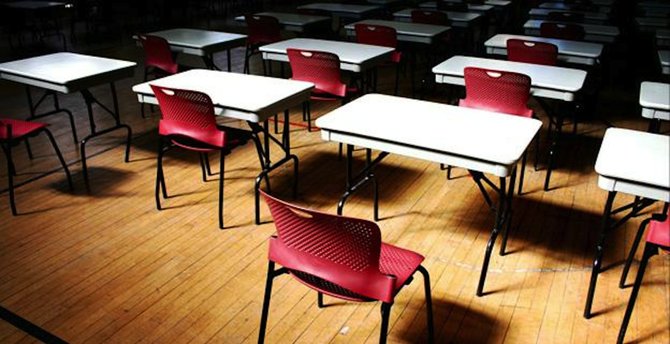 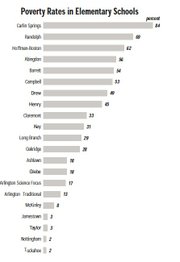 When Linley Mancilla was preparing to send her child to elementary school, she looked at the boundary map and examined the demographics. Then she considered her options. Ultimately, she decided against sending her child to the local neighborhood school, Carlin Springs Elementary, which has 84 percent of its students qualifying for free or reduced-price lunch. Instead, she decided to send her child to the Spanish immersion program at Claremont Elementary School instead. But she acknowledged that all parents don’t have that luxury.

“The folks that know how to get through the process and can take off during the day can apply for the slots and get into the lottery,” said Mancilla. “And those who are not have a limited choice and have to deal with the neighborhood school.”

Like many parents, Mancilla hopes county school officials will use the upcoming boundary changes to create some more socio-economic diversity in the county. A review of demographic data shows that schools in the south part of the county have higher rates of poverty, including Carlin Springs Elementary, Randolph Elementary and Hoffman-Boston Elementary. Schools on the north end, on the other hand, have the lowest rates of poverty, including Tuckahoe Elementary, Nottingham Elementary and Taylor Elementary.

“It’s not like people don’t talk about north Arlington and south Arlington every day — that distinction is made thousands of times every day, and it means something,” said Fred Millar, whose children attended Arlington Public Schools. “People understand the racial and socio-economic division in Arlington with Route 50 being the rough boundary, and not just with the numbers on the streets but the housing prices.”

AS SCHOOL BOARD MEMBERS gather this week to consider a policy that will guide creation of new boundaries, parents and citizens across Arlington are urging the elected leaders to do something about persistent disparities in the county school system. Millar’s suggestion is that School Board members should create a metric that would force a more equitable division of students in the county. For example, he said, School Board members could require that all schools in the county are within 10 percentage points of the countywide average for free or reduced-price lunch. That would require transporting students across the county, but Millar points out that Arlington is the smallest county in Virginia and the vast majority of students already ride buses anyway.

“The bus wasn’t a vehicle invented by the devil,” said Millar. “But if you say the word ‘integration’ to people, they’re going to say, ‘You mean forced busing?’ And that’s the dog whistle phrase that is used to get people’s fear going.”

Many parents agree with Millar that the School Board needs to be doing more to promote socio-economic integration, spreading out the students who live in poverty throughout the county instead of enrolling them all in south Arlington. As board members move forward on creating new boundaries, they say, now is the time to start putting together a plan that will do more than allow students to attend schools closest to their neighborhood.

“Socio-economic as well as racial and ethnic integration should be a fundamental principle for the organization of public education,” said Jim Lyons, a civil rights attorney in Arlington. “I don’t think we want to construct a school system on the basis of residential patterns that are either economic or racial and ethnic segregation.”

MANY PARENTS DISAGREE that busing is the answer. The concept was controversial in the 1960s and 1970s as a way to racially integrate schools across the country, and the practice has been largely abandoned. Now, though, many are concerned that a new form of segregation has emerged that keeps poor kids in south Arlington and rich kids in north Arlington. Even those who are concerned about lingering inequality say busing children across the county is not the answer.

Uro says she would like to see School Board members move to some kind of model that creates a more equitable distribution of students — one that does not cluster students who live in poverty at one school and students who speak English as a second language at another. Accomplishing that will be a difficult task, though. And, for now, School Board members are ready to move forward with vague language about “promoting demographic diversity.” School officials say they want to make the process of creating new boundaries as public as possible, maximizing opportunity for input.

“We have ambassadors who are out working in the community and also making connections with the schools,” said Superintendent Patrick Murphy at a recent School Board meeting.