Long-time Greenspring resident, Dr. Marcia Dake, is not only a woman significant to Greenspring’s history, but also a significant contributor to the fields of nursing and education. 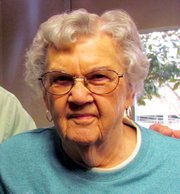 After completing nursing school, Dake spent 14 months as a U.S. Army nurse with a six-month tour of duty in Hawaii and Japan; she was stationed on a ship in Okinawa Harbor during the official V-J Day signing. After serving as an Army nurse, she spent several years as a public school nurse and as a college nurse. With the help of scholarships and the GI Bill, she completed her doctorate in education at Teachers College, Columbia University, and shortly thereafter became the very first Dean of the University of Kentucky’s College of Nursing.

As Dean at the University of Kentucky from 1958-1971, Dake recruited faculty and performed public relation’s duties for the College of Nursing, which opened in the fall of 1960. During National Nurses Week in 2011, she traveled to Kentucky and gave remarks at the College’s 50th anniversary gala held in May. As part of the 50th Anniversary Scholarship Campaign, Dake made a gift to the College which became the Marcia A. Dake Undergraduate Nursing Scholarship, in honor of her niece who had recently received a master’s degree in nursing.

After leaving the University of Kentucky, Dake worked for both the American Nurses Association and the American Red Cross. In 1978, Dake became the first Dean of the Department of Nursing at James Madison University in Harrisonburg, Va. Two years later, the Department admitted its very first Bachelor of Science in Nursing (BSN) class and in 1991, established the Marcia Dake Nursing Scholarship. Dake remained at James Madison University until her retirement in 1988.

Ten years later, Dake moved into Greenspring retirement community from Sun City Center, Fla. in December of 1998, making her a pioneer of the community which opened that same year. Dake is a very active member of the Greenspring community; in 2008, she received the President’s Lifetime Service Award for giving more than 4000 hours of volunteer service throughout her time at Greenspring. Many of those hours of service were spent as Vice President on the very first Resident Advisory Council at the community. Dake also was integral in the development of Channel 6, a closed-circuit television station located on campus which broadcasts throughout Greenspring. She helped to activate the first choral group at the community, now the Greenspring Chorister’s, as well as the first resident newsletter, and the first resident photo directory. Additionally, Dake interviews and videotapes veterans living at the community for the Library of Congress’ Veteran’s History Project.

In observance of National Women’s History Month, Greenspring will be celebrating Dr. Dake’s many accomplishments on March 28 on Channel 6’s "Village in Motion" daily live show.