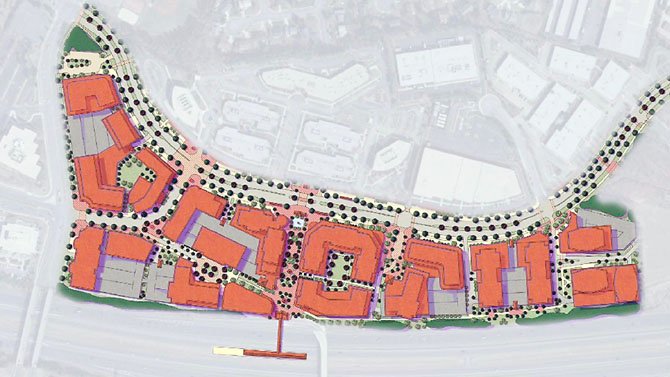 Herndon — The Herndon Town Council voted four to three Tuesday, Feb. 28 to approve the Comprehensive Plan Amendment that allows for redevelopment of the area north of the proposed Herndon-Monroe Metro station. The Council had been considering the plan for months, through various changes and approval from the town’s Planning Commission.

The plan calls for a Herndon Transit Oriented Core (HTOC) that will contain mixed-use development, class A office space and increased density that the town hopes will allow an increase in tax base and eventual return on investment.

Vice Mayor Lisa Merkel said while she would like to see further work done on accessibility to the station, she feels the plan accomplishes what it was originally sent to the Planning Commission in 2009 to do.

"We asked to develop a plan for the Metro Station Area that would encourage the redevelopment of existing commercial properties, include a residential component, increase Herndon’s tax base, provide an economic return on investment to the town and make the development an attractive gateway to the town," she said. "I feel like this plan really accomplishes those goals."

Councilmember Jasbinder Singh, who along with Mayor Steve DeBenedittis and Councilmember Connie Hutchinson voted against the motion, called the plan a "singular opportunity" for the town, but the proposed plan raised too many questions.

"Right now the density proposed is greater than the core of Reston Town Center," he said. "I don’t think I believe only this level of density is financially feasible… it’s one thing if it’s done for some people to promote density before 2017-2018 timetable. But now we have these densities, but we don’t know when it will be redeveloped, maybe by 2035. By that time, the financial information upon which it is based will not be valid."

Singh also cited the fact that plans are currently being drawn up for Phase One, which is supposed to open next year. He said he felt that the town may be rushing into things.

Councilmember Sheila Olem said she liked that the plan was densest around the actual station.

"Density around Metro is where you want it, so you have that new transportation available with the Metro and bus systems, and you can take advantage of it," she said. "We are working with the county, because bus routes are something, that if we’re going to make this work, we’re going to have to coordinate with the county. We know we can’t afford our own system, so we’ll work close with them because they already do the connector buses. We’ve got a huge community that’s going to need access to those buses."

Councilmember Grace Wolf said passing the plan was essential for Herndon to "signal our willingness to redevelop" to attract businesses and residents along the Silver Line.

Wolf also said she had heard the many concerns about traffic in particular, but was confident that the town wouldn’t turn into gridlock.

"I think most concerns were about are we adding urban congestion," she said. "But I think this plan allows us to accommodate traffic, and it looks at the worst-case scenario."

Councilmember Bill Tirrell stressed that this plan was the first in many steps that would bring about redevelopment.

"We’re not discussing a generalized development plan or site plan, which have much more detailed parameters. That’s for another day. We don’t event have the zoning ordinance," he said. "We know what we want, we want access, and an attractive place and to get those needs we need to offer density, that’s the one thing we do have control over."