$45 million facility is seen as a way to revitalize long-struggling school. 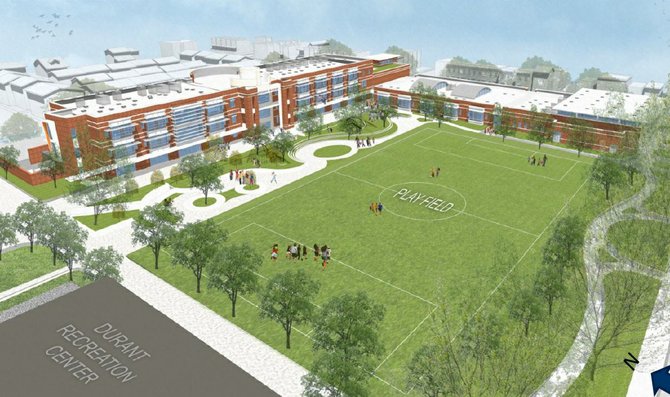 The 130,000-square-foot facility is designed to attain LEED silver status for environmental sustainability. Courtesy of the Alexandria Department of Planning and Zoning

The name “Jefferson-Houston” presents a paradox — a hyphenated marriage of slave-owner Thomas Jefferson and civil-rights leader Charles Houston. For leaders of Alexandria City Public Schools, it presents a predicament — a school where test scores are so low state education officials have forced oversight from outside the public school system.

Now city leaders are ready to take a drastic step.

Last weekend, members of the Alexandria City Council approved a plan to demolish the 1970 building and construct a $45 million new facility expected to open in August 2014. Although the school currently has about 400 students today, the 130,000-square-feet school is designed to accommodate 800 students. Because the school system owns the open space to the west of the existing facility, students can continue to attend classes in the existing building while the new school is constructed. School leaders say the move will provide a state-of-the-art facility that will help turn around the failing school.

“I think we should rename the school,” said Bill Campbell, a Parker Gray resident who was recently elected to the School Board. “Jefferson-Houston has too much baggage. Perhaps we could honor former School Board member Ferdinand Day or the original landowner of the site.”

BACK IN 2009, school officials conducted an assessment of its buildings. That assessment determined maintenance at Jefferson-Houston was anticipated to cost about $12.7 million in the next two decades. Instead of investing money in the building, members of the Alexandria School Board determined a new facility was needed. Enrollment projections show a steady stream of new students coming into Alexandria public schools, prompting school officials to build in capacity for twice as many students that currently attend Jefferson-Houston, which serves children from pre-Kindergarten to eighth grade. Several speakers criticized the design of the facility as too large considering the needs of the school system, especially with plans to construct a new elementary school in Potomac Yard.

“Most parents move out rather than have their kids attend the school,” said Leslie Zupan, president of the Old Town West Civic Association. “How are you going to fill this school?”

The L-shaped building is oriented along North West Street and framed by a centrally located athletic field along Cameron Street. It will include a synthetic turf field, new play areas, a gymnasium and a white box theater — all of which will be available to the community. The building will be designed to attain a LEED silver rating for environmental sustainability. The design was criticized by some neighbors as unsafe because it moves basketball court and playground behind the Durant Center, which some say could create problems because those areas would no longer be visible from the street.

“It’s not safe,” said Bea Porter, a neighborhood resident whose grandchild attends the school. “The move would encourage a crime pocket as it’s not visible from the street.”

SCHOOLS HAVE been located on the property for almost 100 years. The old Alexandria High School was constructed in 1915 on Cameron Street at the visual terminus of North Peyton Street. Then, in 1922, the Jefferson School was constructed on North West Street at the terminus of Queen Street. Both of these buildings were demolished in 1970 to construct Jefferson-Houston Elementary School, a design that incorporated ideas that were popular at the time about “open classrooms” and “pod design.”