At its Annual Membership and Awards Luncheon, the Metropolitan Washington Council of Governments (COG), a nonprofit association of 300 area elected officials, presented Fairfax County Supervisor Cathy Hudgins with the organization’s highest honor. Hudgins received COG’s Elizabeth and David Scull Metropolitan Public Service Award for her work as chairman of the Board of Directors of the Washington Metropolitan Area Transit Authority (WMATA), which oversees the region’s Metro system. 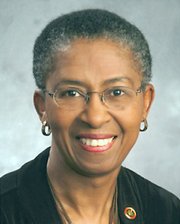 COG Board Chair Frank Principi said that Hudgins was the “thoughtful, steady, and insightful leader” the region needed to help restore confidence in Metro, which has faced serious challenges and increased scrutiny in the past several years. Her peers at COG noted many accomplishments at WMATA, such as making the safety and maintenance of the system the top priorities of her chairmanship and advocating for Metro’s funding needs.

Hudgins also spearheaded several changes to improve the transit agency’s governance following recommendations by COG, the Board of Trade, and other groups. She initiated and oversaw a process in which WMATA adopted its first-ever Bylaws and a modernized Code of Ethics. The Board also agreed to end the custom of rotating the Board Chairman every year. As a result, Hudgins was elected for a second consecutive year in 2012, which provided stability during major turnover among WMATA board members and senior staff.

Her regional colleagues also noted the key role Hudgins has played in ensuring the completion of the Silver Line’s first phase to Reston as well as the agreement that will build the second phase to Dulles Airport and Loudoun County.

In addition to WMATA, Hudgins has led several other regional groups over the past few years, including the National Capital Region Transportation Planning Board, the Virginia Association of Counties, and the Northern Virginia Transportation Commission.

The Scull Award is presented annually to a local, state or federal elected official for outstanding service to the metropolitan Washington region. It is named after the late Montgomery County Councilmembers, who were strong supporters of COG and regional cooperation.