Ceremony At The Alexandria City Chamber 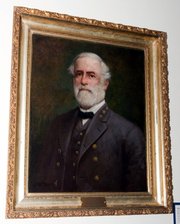 The portrait of General Robert E. Lee on display in the Alexandria City Hall City Council Chambers. The 100-year-old oil painting was painted by Virginia artist George Bagby Mathews (1857-1944) in the late 19th century. Although only 7 years old at the end of the Civil War, Mathews identified with the “Lost Cause” and concentrated on historical paintings and portraits of Confederate subjects.

Vern McHargue, past commander of the General R.E. Lee Camp #726, SCV, emphasized General Lee’s moral compass, the importance of “maintaining honor, duty and hope in his darkest hour.” McHargue was recently a controller for finance and operations at The Heritage Foundation. 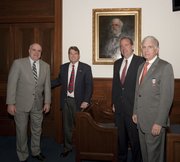 It is the portrait across the room from George Washington’s painting in Alexandria’s City Council Chambers. This handsome oil painting bears the likeness of Robert Edward Lee, a son of Virginia and that of Revolutionary War hero “Light-Horse Harry” Lee III, a West Point graduate and superintendent of that institution, who ultimately made one of the most crucial and most difficult decisions in his life as a colonel in the U.S. Army when he resigned his commission to serve as the general for the Army of Northern Virginia in the Confederate States of America during the Civil War.

On Monday, Dec. 3, the members of the General R.E. Lee Camp #726, SCV (Sons of Confederate Veterans), and the General Samuel Cooper Chapter #105, MOS&B (Military Order of the Stars & Bars), and their guests, met at the Alexandria City Council Chambers for the re-dedication of General Robert E. Lee’s portrait.

The portrait shows Robert E. Lee attired in a butternut uniform with three stars on his collar as would reflect a Confederate general. George Bagby was only 7 years old when the Civil War/War Between the States ended, but he directed his artistic pursuits to generally portraying historical paintings of the “Lost Cause” and portraits of many of the Confederate leaders in that war.

Guests and speakers at the re-dedication ceremony were Vern McHargue, past president of the General R.E. Lee Camp #726, SCV, and Frank H. Fannon IV, councilman for the City of Alexandria.

McHargue paid tribute to the moral character of Robert E. Lee, reciting one of the principles that Lee passed down in his own words: “Do your duties in all things. You can not do more, you should never wish to do less.” McHargue deplored the unethical behaviors and decline of this country over the course of 150 years, maintaining that Robert E. Lee’s character “inspired devotion and emulation to his soldiers.” Furthermore, after the war, R.E. Lee encouraged the South’s citizens to accept the situation and urged for reconciliation. True to his words, Robert E. Lee took the Amnesty Oath on Oct. 2, 1865 in Rockbridge County, Va. Unfortunately, this document did not provide a pardon for Lee or restored his citizenship. Secretary of State William Seward had handed over Lee’s application for amnesty to a friend as a souvenir. The lost document was discovered by an archivist in the National Archives in 1970. In 1975, President Gerald Ford granted Robert E. Lee posthumous reinstatement as a citizen of the United States of America.

McHargue passed around a color copy of the Office of the Notary Public, Rockbridge County, Virginia Amnesty Oath that Lee had signed.

Fannon, the great grandson of an Irish immigrant and a fifth generation resident of Alexandria, drew another picture of life during the Civil War for Irish immigrants who left poverty and starvation behind in Ireland only to arrive in America, either through northern or southern ports, to be inadvertently swept up into the Civil War by conscription, or compulsory enlistment. Sometimes these immigrants were paid to take another enlistee’s place.

Concurrently with the operations of the Civil War, Fannon emphasized how transportation had opened up in the nation with the first gold railroad spike driven in the 1860s, changing the course of destiny for this country. General Robert E. Lee, after the war, foresaw that this nation would need to recover from war and restore peace to all. Moreover, Robert E. Lee refused to consider leaving Virginia, the state of his birth. “I cannot desert my native state in the hour of her adversity. I must abide her fortune and share her fate”, said Robert E. Lee.