Being Muslim in Fairfax County
Votes

Being Muslim in Fairfax County 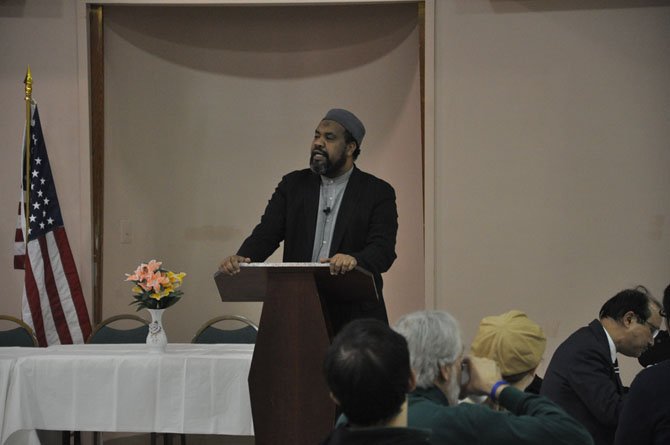 Imam Mohamed Magid, executive director of the All Dulles Area Muslim Society, speaks on the importance of faith in peace Feb. 3, 2011, during the ADAMS commemoration of World Interfaith Harmony Week. Photo by Alex McVeigh.

Over the years, Muslims from different countries migrated and settled in the Fairfax County area; however, the children of immigrant parents often struggle the most because they have to balance their Islamic faith along with the influence of American culture.

Sarah Khan has lived in the Springfield area for the past 42 years after coming to America from Pakistan at the age of 11. “In the 1970s, there was one mosque: the Islamic Center in Washington, D.C. Everybody just went to that one. So, as Muslims we were very united. Nobody fought with one another. There was like 50 to 60 families that used to come to the mosque and everybody got along well,” Khan said. Now there are many mosques in the area such as Dar Al-Hijrah in Falls Church, Darul Huda in Springfield and ADAMS in Sterling, to name a few.

Back when Khan was growing up in the area, nobody knew what Muslims were. “The hardest part was when I was fasting as a young girl and my P.E. teacher made me run. I told her I was fasting and she didn’t realize what fasting was,” Khan said. When Khan told her teacher she was Muslim, her teacher replied, “What is that?”

Khan admits that it is much easier being muslim in today’s society. “Everybody knows your religion. People respect it. You’re free to do what you want. You don’t have to pretend to be somebody you’re not. You can still be yourself and be accepted,” Khan added.

SOME MUSLIM PARENTS turn towards putting their children in Islamic schools to help them retain their Islamic identity. Al-Qalam Academy, located in Springfield, is an all-girls Islamic school from grades fifth through 12th. Girls at the school are taught the core subjects of math, science, English and history in addition to learning Islamic studies, Arabic and the holy Quran.

“It is hard to balance my life socially and religiously,” Samira Sather, a seventh-grader at Al-Qalam Academy said. “I attend lectures in mosques and pray five times a day. Sometimes when I leave the house and one of our prayers pass by, I feel shy to pray in public because I already attract too much attention,” Sather said.

Maryem Ahmed, an eighth-grader at Al-Qalam Academy, is a third generation American who was born in Fairfax County. “I don’t generally call much attention to myself as a Muslim, but some people view me with their perceptions of what a Muslim is because I wear hijab [religious head covering]. And those perceptions are many times misconceptions of who I am,” Ahmed said.

“Sometimes when I meet people for the first time, they seem shocked to hear me speak to them without a foreign accent. It’s like, they see me wearing hijab, and immediately think I come from overseas,” Ahmed said. “Not that there’s anything wrong with coming from overseas, but it’s just that they’ve already jumped to the conclusion that I’m not even from America, without even speaking to me,” Ahmed said.

Sather looks up to her mother for wearing the hijab. “I think of my mother and wonder how she goes through it all. She looks different and speaks differently, in addition to being a Muslim. I admit it’s hard to abide by all the rules Islam gives us. I strive to be like my mother because she doesn’t care what anyone else judges her for; she is focused on what God will judge her on,” Sather said.

More than 11 years have passed since Sept. 11, 2001; however, Muslims continue to face prejudice. Ahmed experienced an act of injustice not too long ago. “My older sister and I were going to a local restaurant, and there was a man standing outside,” Ahmed said. “As we passed him to go inside I saw him, out of the corner of my eye, spit in our direction, barely missing my shoes. I turned to look at him in surprise. Instead of apologizing, that person simply glared at me with a look of disgust on his face,” Ahmed said.

Abdullah Malik, an African-American who grew up in the Northern Virginia area, was only 16 at the time of 9/11. His younger brother, 13 years old at the time, was framed by his peers at school, in a situation in which they illegally broke into his locker and placed a ticking device mimicking a bomb inside. “This caused the bomb squad to show up to our school, evacuate the entire building of 4,000 students, blow up his entire locker in front of his friends and then proceed to interrogate him for hours,” Malik said.

Similarly, Khan’s children were treated differently after 9/11 at school. People made fun of their names. People also made fun of their background even though they had never even been to Pakistan. Some children said, “Oh, you are hiding in the mountains!”

Khan raised her children with the intent that America is their home. “We are Americans, we are Pakistani-Americans, but that’s where the challenge came after 9/11. The kids asked, ‘Are we American or are we Pakistani? What are we?’ So that was a big thing, a big challenge that came,” Khan said.

KHAN’S NEIGHBOR, who she had been living next door to for the past 20 years, stopped speaking to her the day after 9/11. Prior to that, the two friends would exchange Christmas and Mother’s Day presents. “We basically watched each other’s kids,” Khan said. However, it took a long time before Khan’s neighbor came around and started speaking to her again.

Another thing that came out of 9/11 was that both Muslims and non-Muslims were hurt. “That trust was gone and it takes time to rebuild that trust. But one good thing that came out of 9/11 was that the younger generation of Muslims started getting very involved politically and socially,” Khan said. Five months after 9/11, Malik started an interfaith dialogue program with a local synagogue and church. “I worked on educating people about our religion and the peace it teaches,” Malik said.

Sather has noticed that over the years, people have treated Muslims a little better. “When I attempt to wear the head scarf, people treat me with more respect than when I don’t wear it,” she said. “Also, as I get older, I realize there is absolutely nothing to be ashamed of.”

Khan hopes that her future generations take the good from her background as well as their American background and blend the two. “Some of the good things of American culture are honesty, respect, and tolerance for others. Some of the good things of my culture are religion, family values and traditions. The biggest challenge is to make sure that the generations to come have both,” Khan said.