How To Register, Vote and Vote Early
Votes

How To Register, Vote and Vote Early 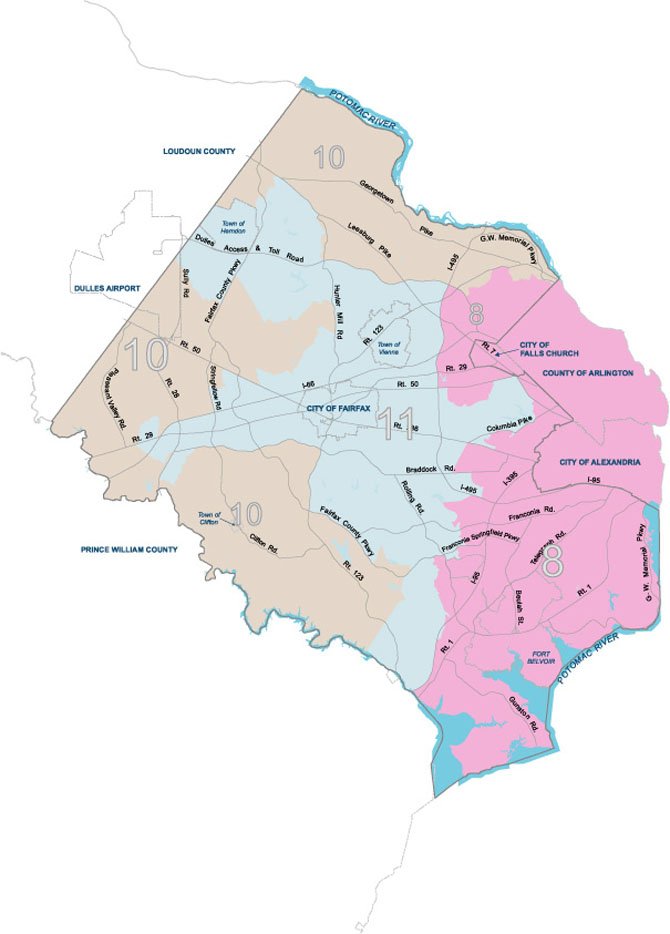 There have been major boundary changes in the Congressional districts serving Fairfax County since the last election two years ago. Map provided by Fairfax County government

Why does it matter?

How important is it for Virginia voters to turn out on or before Nov. 6? As a critical “battleground” state, Virginia will be key in determining who will be the next President of the United States. Who will represent Virginia in the U.S. Senate is also too close to call. Since polling shows that there are very few undecided voters in the Commonwealth, every eligible voter will want to be sure to cast a ballot.

This area has very high rates of voter registration. Consider that Fairfax County, with a population of just more than 1.1 million people, has 711,817 registered voters. And 24 percent of Fairfax County's population is under 18, so not eligible to vote.

In order to vote on Election Day, you must be registered at your current address no later than Oct. 15, 2012. You can check your registration status online by going to www.sbe.virginia.gov. There you can also download a voter registration form and mail it to the elections office address, listed above.

Voters arriving to the polls without ID will be required to vote a provisional ballot and will have until noon on the Friday after the election to deliver a copy of identification to their locality's electoral board in order for their provisional ballot to be counted.

All Virginia active registered voters will be mailed a new Virginia voter identification card prior to the November 2012 General Election. Call 804-864-8901 or toll free 800-552-9745, TTY toll free: 800-260-3466. According to the State Board of Elections at presstime, some of the voter identification requirements listed are pending preclearance from the Department of Justice.

Virtually every voter in Virginia is eligible to vote absentee, which includes voting in-person absentee at a variety of locations between Sept. 21 and Nov. 2.

There are many reasons that voters are allowed to vote absentee, but the most broad of these applies to almost anyone with a job: “Any person who, in the regular and orderly course of his business, profession, or occupation, will be at his place of work and commuting to and from his home to his place of work for 11 or more hours of the 13 that the polls are open (6 a.m. to 7 p.m.).

See http://www.sbe.virginia.gov/cms/absentee_voting/index.html for a complete list of acceptable reasons to vote absentee, links to download a request for an absentee ballot and other instructions.

You can download an absentee ballot and mail it to your local voter registration office, or you can vote “absentee in person.”

Absentee In-person Voting in the City of Alexandria:

Regular hours for in-person absentee voting are Monday - Friday, from 8 a.m. - 5 p.m. at the Office of Voter Registration and Elections, 132 North Royal Street, Suite 100 (the office is closed on Monday, Oct. 8).

More details, including dates of extended hours at http://alexandriava.gov/elections/info/default.aspx?id=1720

WHAT'S ON THE BALLOT?

Every voter in Virginia will vote for U.S senator and their member in the U.S. House of Representatives, in addition to President of the United States and two constitutional questions.

Two constitutional questions will appear on all Virginia ballots, one about the use of eminent domain and one about the timing of a particular session of the General Assembly to consider overriding vetoes by the governor of legislation that was passed by the assembly. See http://www.sbe.virginia.gov/webdocs/201211ConstitutionalAmendmentsPoster.pdf.

In the races for U.S. House of Representatives, it's worth noting that redistricting resulted in significant changes in Northern Virginia in terms of who your U.S. representative will be. If you live in Reston, for example, while last election you were represented by Jim Moran and the 8th district, now you are in the 11th district where the incumbent is Gerry Connolly. See the map for details. Fairfax County is represented by three Congressional Districts, 8, 10 and 11. Connection coverage of congressional races is available at http://www.connectionnewspapers.com/news/Election/National/Representatives.

In the 8th District, incumbent Rep. Jim Moran (D), seeking his 12th term since being elected in 1990, will face Patrick Murray (R), and two independent candidates, Janet Murphy and Jason Howell. The 8th district includes all of Alexandria and Arlington, plus parts of Fairfax County including Mount Vernon, Lorton and parts of McLean, Tysons and Falls Church.

In the 10th District, Frank Wolf (R), elected to office in 1982, will face Democrat Kristin A. Cabral and independent J. Kevin Chisholm. The 10th district sprawls from McLean to Winchester, and includes Great Falls, Chantilly, parts of Fairfax Station, the Town of Clifton, part of Burke and Springfield.

In the 11th District, Gerry Connolly (D), former chairman of the Fairfax County Board of Supervisors, elected to Congress in 2008, will face Republican Chris Perkins and Independents Joe Galdo, Mark T. Gibson and Peter M. Marchetti. The 11th district now includes the City of Fairfax, the Town of Herndon, Reston, central Fairfax County including parts of Burke, Springfield and Lorton.

IN FAIRFAX COUNTY, voters will also decide whether to invest in infrastructure based on four bond questions, answering yes or no to supporting $75 million for parks, $55 million for public safety facilities, $25 million for library facilities and $30 million for stormwater and sewer improvements. http://www.fairfaxcounty.gov/elections/nov_2012_county_bond_issues.pdf

IN THE CITY OF ALEXANDRIA, voters will also choose a mayor, members of the city council and school board.

The Alexandria City Council is composed of a Mayor and six Council members who are elected at-large for three-year terms. Incumbent mayor Bill Euille (D) will face Andrew H. Macdonald (I) in the race for mayor.

The Alexandria City School Board is a nine-member elected body that adopts policy for the daily operation of schools and sees that school laws are properly explained, enforced, and observed. The city is divided into three voting districts, and three Board members are elected from each district. Each member serves a three-year term. Incumbents marked *.

Incumbent Libby Garvey (D) will face Matthew A. Wavro (R) and Audrey R. Clement (I) for the seat on the County Board.

Arlington voters will also decide yes or no on four bond questions, whether to authorize raising $32 million public schools, $28 million for community infrastructure, $50 million for local parks and recreation, and $32 million for Metro and transportation. http://www.arlingtonva.us/departments/voterregistration/forms/Bonds2012ENG.pdf