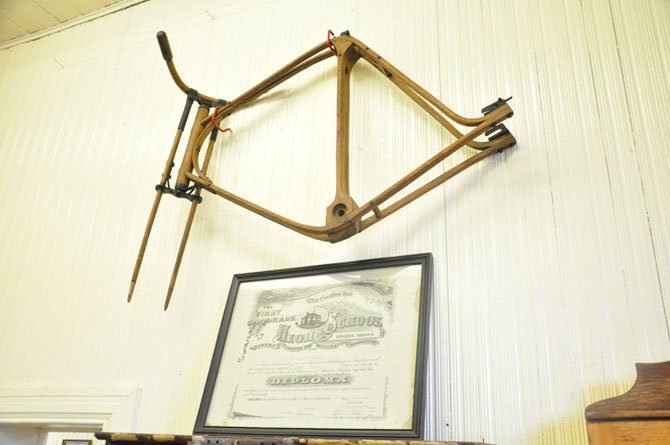 A Herndon High School diploma from 1949 and bicycle frame made out of wood by Herndon resident William Kephart built around 1900, on display at the Herndon Depot museum. Photo by Alex McVeigh.

Herndon — Commander William L. Herndon, never actually set foot in the town that bears his name. The naval commander died 22 years before the town was founded, going down with his ship, the S.S. Central American, when it sank in Sept. 1957 off the coast of Cape Hatteras, loaded with three tons of gold. 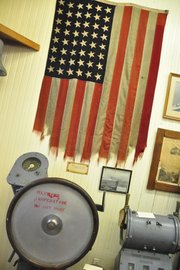 Controls and the American flag form the U.S.S. Herndon, which was used at Omaha Beach in World War II, on display at the Herndon Depot museum.

Herndon, Va. was one of two towns named for Commander Herndon, along with Herndon, Pa. Two ships also bore the name U.S.S. Herndon, one of which participated in the invasion at Omaha Beach.

Around the same time as the death of Commander Herndon, the railroad came through what would become the town, marking a stop that was 20.9 miles west of Washington, D.C. and 26.8 miles from Round Hill, a popular recreation destination.

In 1858, the U.S. Post office decided the town would be a good place for a post office, and over the next 20 years, the town survived damage to the railroad from the Civil War and built up several buildings.

On Jan. 14, 1879, the Commonwealth of Virginia approved a charter for 4.5 acres of land, with the railroad station in the center.

THE STATION, known as the Herndon Depot, still stands today near the intersection of Lynn Street and Station street. It is maintained by the Herndon Historical Society.

"The society was founded in the early 80s as the Depot Society, in order to save the depot from being torn down," said Carol Bruce, president of the society. "Since then, our primary focus has been to promote the town’s history in any way we can."

The depot still exists as it did during its use as a railroad station, with the signal controls, old ledger books and even a segregated waiting room that was part of the station. 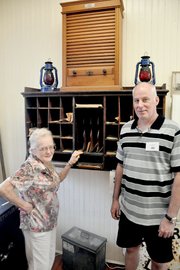 Ann Csonka and Kenny George, volunteers at the Herndon Depot museum, in front of an original mailbox featuring order forms from the early 1900s.

"The upper portion was where most of the heavy-duty stuff went on, the heavy planks were to support the freight that was going on and off," said Kenny George, a volunteer at the museum.

The upper platform now contains hundreds of artifacts from Herndon’s history, all the way from arrowheads discovered during the construction of the Herndon Centennial Golf Course.

"Someone found a whole bunch of arrowheads a few years ago, but they decided to give them to the Smithsonian, which was a shame, they have storage warehouses full of that stuff," said Ann Csonka, a volunteer at the Depot. "That was too bad, we’re short on natural history artifacts here."

There’s even an artifact from the ship that Commander Herndon went down with, a piece of anthracite coal. "They couldn’t get us any gold I guess," George said.

"It’s amazing how they were able to gather so much from so many eras of history into that one section," said Mary Baker of Herndon, who likes to stop by the museum during her Sunday bike trips. "They have artifacts from even before Herndon, but also some interesting stuff from the 50s and 60s, which was when I was growing up."

Closer to the control room, the museum features a mailbox filled with orders from 1912-1917, mostly for milk and other farm products.

Near the entrance there are a few photo albums with historical photos of everything from the buildings that were built around the stations, to photos of the farmland that existed where major developments are.

"I love the photos, they’re my favorite thing to pore over when I have some time," said Vanessa Boyd of Centreville, whose parents are Herndon natives. "The funniest thing to me is that the photos of downtown from 100 years ago look sort of the same as the downtown does now, a lot of the same buildings are there. But then you look at others, and it’s a world away from where we are now."

ANOTHER SECTION is dedication to Commander Herndon. A statue made by students at Herndon High School in 1980, along with a painting and several articles about Commander Herndon are posted, including his report on the Valley of the Amazon. Also on display are several of the controls from the U.S.S. Herndon, an article about Commander Herndon’s daughter, who was married to President Chester A. Arthur before he was elected, and other town memorabilia.

Nearby the museum is the old boxcar, which, while an authentic car, was not one that ran on the W and OD Railroad.

"The caboose was brought in by George Moore, who was a huge train enthusiast who almost single-handedly brought it here," Bruce said. "He got it delivered, talked to the Department of Public Works to get the track laid and everything."

The caboose served in the Wheeling and Lake Erie Railroad from Aug. 1949, until it was donated to the Town of Herndon in November 1989. It was renumbered to 504 to pay tribute to the W and OD car number 504.

The Depot museum is open from noon to 3 p.m. on Sunday afternoons, and can also be opened by special appointments for groups. More information on the society can be found at www.herndonhistoricalsociety.org.