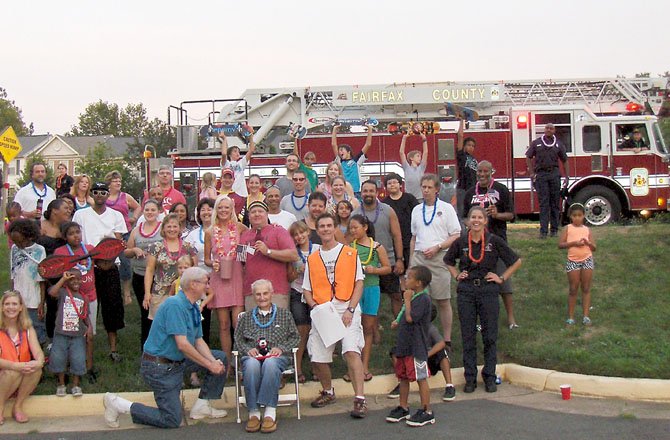 A group shot of residents and Station 38 firefighters at Belcher Farm and Beaumeadow Court. Sheree Glaze and Clint Crawford (in center, in cap and holding flag) organized this block’s party with Bill Worthington. Photo by Bonnie Hobbs.

Centreville — It could have been just an ordinary Tuesday night — families eating quiet dinners in their homes, behind closed doors. But instead, last Tuesday, Aug. 7, residents of Centreville’s Sully Station II community joined together in four neighborhoods for outdoor block parties.

They did so in unison with people all over the U.S. as part of the annual, National Night Out celebration. The goals are to strengthen connections among neighbors and between them and their local, public-safety personnel.

And in Sully II, firefighters from Station 38, police from the Sully District Station and even members of the Sheriff’s Office joined in the fun.

Firefighter Jovan Reid just graduated from the Fire Academy three months ago, so he was attending his first National Night Out. “I’m really enjoying myself,” he said. “I love coming out here, getting to know everyone and seeing people when it’s not an emergency.”

Resident Eva Salandy organized the celebration on Flower Hill Drive. The theme was the Flower Hill Drive Olympics, complete with five competition events and an opening ceremony. The children wore clothing representative of their cultural heritage, such as a shirt from Trinidad and a lehenga saree from India. Then they walked down the street together and a tiki torch was lit.

They also competed for medals in a marshmallow relay race, balloon-in-a-bin (like volleyball), javelin toss with a pool noodle, coin shot put, and obstacle course while blindfolded and riding a toy horse. And above the food tables were five, big Olympic rings.

“We have flags of the different countries on display and we all brought food to represent our cultures and U.S. pride,” said Salandy. “There’s Jamaican jerk chicken and beef patties, fried rice, burritos, lasagna, a Ugandan dish, an Indian dish and patriotic desserts.”

“We’re all connected as a block,” she added. “We even do pizza nights every first Friday of the month.”

Lt. John Trace, 2nd Lt. Matt Doyle, PFC Adrian Steiding and 2nd Lt. Tom Munday were there from the Sully District Police Station, enjoying the food and mingling with the residents. Munday, on the evening patrol shift, has attended National Night Out all four years he’s been at the station.

“It’s nice — I like how the communities get together,” he said. “And they all have different themes.” He said the pizza, hot dogs, hamburger and fruit he’d had that night were delicious and he was glad to see the police so warmly received by their neighbors.

“This gives us an opportunity to be available to them and they can ask us questions,” said Munday. “They asked me what was the most exciting call and the most interesting call I’ve been to. They seemed interested in police work. When a fire truck’s around, the kids all go to it; but when the firefighters aren’t here, the kids come talk to us.”

Steiding also works evenings and is assigned to that area on a regular basis. “So this is a good chance to see everyone in the daytime,” he said. “It lets them know we’re out here and we care about them as much as they do for us.”

“It’s nice of them to come out here to support us and do a meet-and-greet,” he continued. “It’s not just about writing tickets; we like to meet the people in the area we patrol, and they can ask us questions on the spot.”

Alyssa Krupinski has lived in the neighborhood two years and says she and her family love it. “We like the friendliness of the neighbors and the diversity,” she said. “And it’s kid-friendly; two of us are pregnant, so there’ll be more babies.”

On Wood Creek Lane, Bonnie and Neal Worthy organized the block party, and the menu included fried fish, sausage, grilled peppers, French fries, onion rings and coleslaw. Chatting together were friends and neighbors Matt Chubb, Jeff Chillemi and Neal Worthy. They said Chillemi’s called the Mayor of Wood Creek Lane because people are always asking him for advice and he’s glad to oblige. “We all stick together like glue,” he said.

“We make sure each other’s houses are taken care of,” said Chubb. “After the derecho took out half of a neighbor’s tree, we cut it up and moved it out of the street.”

“Nobody asked for help,” added Chillemi. “We saw a need and did it.” Then they all went out to breakfast together afterward. “I’ve been here 20 years, and that’s the way it’s always been,” said Chillemi. “We even get together for dinners on Sunday; it’s fun having great neighbors like that. And at Christmas, we took huge plates of chicken and rice to the police and fire station because they had to work.”

If someone’s on vacation, he said, “We take care of their house so no one breaks in. We water their lawn, too. And when kids are outside, we make sure there’s always an adult there to watch them. It takes a village, and this is a great village.”

They, too, had an Olympic theme for their National Night Out event. Children competed in three-legged races and walked on a balance beam of a 2x4 piece of wood atop low cinder blocks.

“It’s good to thank the fire department and police officers for what they do,” said Chubb. “They’re people we may need for service.”

Added Worthy: “They appreciate it and return every year for the fried fish and onion rings.” 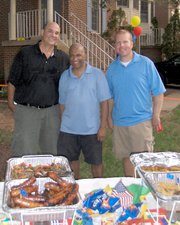 “This brings everybody out here to have a good time,” said Worthington. “There are a lot of kids and some new neighbors, and they get the chance to meet each other. We also have really good food; Clint made the chicken and I made the jerk pork and the rice dish.”

Trish Strother lives in Centreville’s Country Club Manor community now, but she and her husband returned for the celebration. “We used to live in this neighborhood on Beaumeadow,” she said. “So we come back every year to join in the festivities. It’s a fun, party group — great, wonderful, outgoing people.”

On Hartlaub Court, two members of the Sheriff’s Office, stood next to their cruiser in the middle of the cul-de-sac and handed out hats, cups, pencils, Frisbees and junior sheriff’s badges to a large group of children. Both PFC Raza Zaidi and PFC Michael Snow work at Fairfax County’s Adult Detention Center; Snow also works security at the county courthouse.

It was Zaidi’s first National Night Out here and he was happy to participate. “It’s a great event,” he said. “Working with the community and interacting with the parents and children is wonderful. It builds up the community and is great public relations.” Later, Snow thanked the neighbors for their hospitality; and as he and Zaidi drove away, the children stood together and waved goodbye to them.

Residents Jen and Jim Franconeri organized their block’s celebration with a Day at the Beach theme, complete with Hawaiian leis, plus a moonbounce and tetherball for the children. About 65 people attended.

“We have a little pool, a palm tree, beach balls, lanterns in the trees and palm leaves and seashells on the table,” said Jen Franconeri. “We served pizza, chicken wings from Hooters, salads, fruit, ice cream, cookies and brownies. We also have a popcorn machine that’s been a big hit with the kids.”

Eileen Smith, who’s lived there 21 years, has been part of Sully II’s Social Committee since 1992. She came to the block party after work, but brought lemonade and cupcakes to share. She called her community “a great location with great people.”

“Walking the trails and walking paths is a great way to meet your neighbors,” said Smith. “We have a lot of functions, such as a wine club, chili-bingo night, pool social night, breakfast with Santa, Easter egg hunt and a stellar swim team. And there are friendly, dedicated residents who’ve volunteered here for 20 years or more.”

Franconeri said she and her husband enjoy hosting National Night Out each year because “it’s a good sense of community. There are great people here willing to help out, and Dan and Leslie Jenuleson are great Neighborhood Watch coordinators.”

Besides, added Franconeri, “This is a way of thanking the police and firemen for all the good work they do. It lets us show our appreciation to them.”