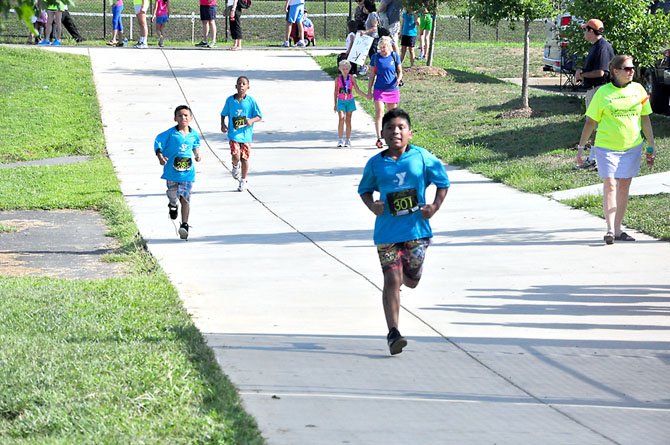 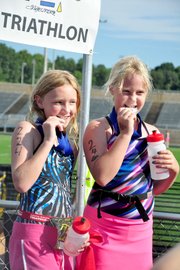 From left, Karina Silva, 10, and Julia Thomas, 8, show off their medals after finishing the Reston Sprint Triathlon, Sunday, Aug. 12.

"It was definitely very hard to finish, but my goal was not to have to walk the whole time and I didn’t have to," said Stephanie Morgan, 11, of Falls Church. "The swimming might have been the hardest, because at the beginning you feel like you can go on forever, but once you try to get on your bike all soaking wet, you realize there’s a lot more to go."

Douglas Janssen, 11, of Ashburn, said running was the toughest part for him.

"Biking and swimming are fun, because they’re something you can do and be a little more relaxed," he said. "But running is mostly just for exercise and it’s a little boring. And it wears me out more than the other two, so I’m glad it was last."

Herman Smith of Reston says the triathlon has led to several big changes for his daughter, Hannah, 10. 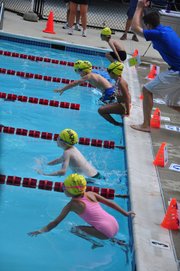 "Signing up for the event helped her learn how to ride a bike without training wheels, it always scared her, but once a few friends signed up, she didn’t want to feel left out, and that meant dedicating herself to learning to ride," he said. "Between training for this event and watching the last week of track and field events in the Olympics, I think she’ll be really motivated to ride, bike and swim from now on."

With the event in its second year, some children, such as Gina Tutt’s daughter Hailey, 9, used their experience to better prepare.

"Last year she was excited to be doing things with kids, and while she attended a few of the training clinics, it was definitely about having fun," she said. "But as she was getting ready for this year’s, she was really dedicated. She was going on practice runs, rides and swims, and checking her times and she even practiced the transitions to shave off as many seconds as she could."

FUNDS RAISED AT THE EVENT went to youth scholarship programs, and 40 of the participants were able to do so because of scholarships that helped them register and get the equipment needed to participate.

"We didn’t want people with an interest to not be able to participate because they didn’t have the money to get a bike or pay the entry fee, so we were able to provide new bikes and helmets that they can keep," said Larry Butler, RA’s director of Parks and Recreation. "We hope this event helps introduce a healthy lifestyle to the kids."

"With three different activities, hopefully they can find one that they really liked," he said. "And if they find they like the biking, running or swimming, maybe that’s something they can keep doing and eventually graduate to our Sprint Triathlon, or Fall Triathlon, in a few years."