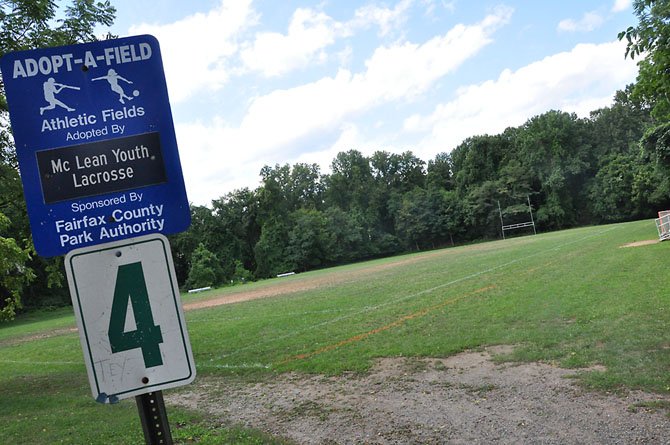 Field number four at Langley Fork Park, under master planning by the Fairfax County Park Authority. The field is one of two rectangular fields at the park, which some residents hope will eventually be refurbished. Photo by Alex McVeigh.

McLean — The Fairfax County Park Authority has announced a delay in the master planning process for Langley Fork Park, a 54-acre site located just north of the intersection of Georgetown Pike and Dolley Madison Boulevard. The park, which contains two diamond fields, two rectangle fields, basketball courts and a fitness trail, is owned by the National Park Service. 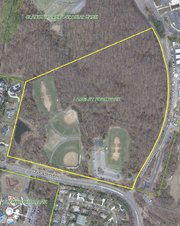 The master planning process for Langley Fork Park has been delayed by the Fairfax County Park Authority, who cited the need for additional studies before a draft can be presented to the public.

The park authority was originally supposed to have a master plan prepared for public comment by late spring or early summer of this year. According to the park authority, "field investigations of the site last fall and this spring indicate the possibility of resources that require further investigation."

Last October the NPS announced a land swap with the Fairfax County Park Authority, to exchange the nearby Langley Oaks Park, which is closer to the George Washington Parkway and under the NPS management.

Dottie Marshall, superintendent of the GW Parkway, said that the NPS has owned the property since 1972, but haven’t managed or made any investments since 1980. The park was master planned by the Fairfax County Park Authority that year and the process includes a 25-year permit for county use, which has been renewed every year since then.

"We believe [the swap] will bring greater accountability to the management and operation of the park," Marshall said. "It will also provide opportunity for investment in the park."

Supervisor John Foust (D-Dranesville) said discussions for improving the park date back to his tenure as president of the McLean Citizens Association, but that since it is still run on a year-to-year lease, "there was a reluctance to invest in the property."

MOST OF THE PARK remains undeveloped, and according to current plans, will remain so. Field users say that the facilities are in need of fixing.

"The fields here are pretty rough, the pits and divots are ripe for twisted ankles," said Barry Okun of McLean, who has children that play on the field regularly. "Field number four especially could be made into a beautiful, secluded, state-of-the-art field that wouldn’t disturb neighbors, if only the work was put into it."

Gayle Hooper, project manager for the park authority, said the swap would allow Langley Oaks to "remain a wooded area under the care of the National Park Service," and that the Langley Forks would also remain mostly unchanged "with any improvements the community believes are worthwhile."

Park authority board member Kevin Fay said during a previous public meeting that Langley Forks "has some of the greatest potential" for development in the area, with improvements of existing fields and addition of new facilities being a possibility.

ACCORDING TO THE PARK AUTHORITY, a more detailed series of studies will be conducted so "the master plan can move ahead in an informed fashion, with greater knowledge of the value of the site."

The type of studies have not been released by the park authority, but updates will be released as they become available. Updates and additional information on the process can be found at www.fairfaxcounty.gov/parks/plandev/langleyfork.htm.