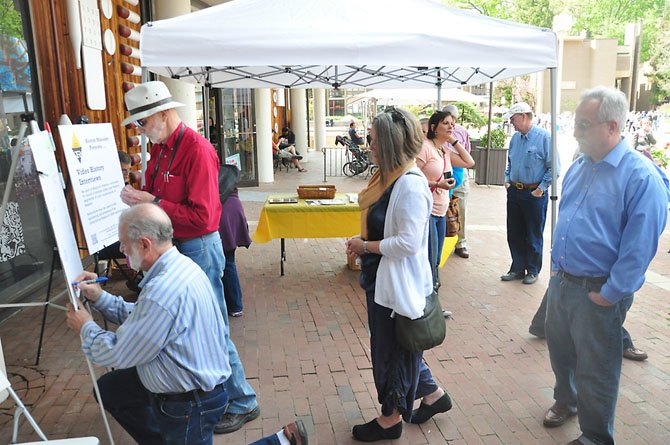 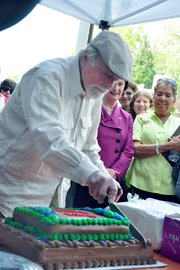 Chuck Veatch, a member of Simon’s sales staff in the early sixties, served as master of ceremonies for the event, and he spoke about Reston’s history.

"We come to celebrate Reston’s history as starting in 1964. But there are a lot of other dates prior to then as well: in 1961 Bob bought the property, in 1962 it was being zoned and planned, in 1963 development actually started," Veatch said. "Reston had been known throughout the world as a very exciting project, but in October 1964 we opened our doors and allowed the world to see what it was actually about."

The press showing for Reston was Oct. 4, 1964, and a month later the first business moved in. The official "first family" of Reston, Sam and Katie Furcron, moved in December 1964.

Supervisor Cathy Hudgins (D-Hunter Mill) came to Reston 43 years ago for its reputation, and said she doesn’t have any regrets.

"We wanted a place that we could raise our children and have them be accepted and learn to give back, and I think it’s been a perfect experience for them and for us," she said. "We want to make sure Bob Simon’s dream is transferred to everyone who decides to set foot in Reston. Bob built a structure to connect us and remind us how to live together as a community."

Gabriel Baerga moved to Reston 10 years ago, shortly after getting married and moving to the area from California. During his decade here, he’s witnessed some of Simon’s principles in action.

"I’ve had two kids here, I’ve walked with them on the paths, to the playgrounds, to the community center and it’s been a wonderful experience," he said. "This community’s priorities are very much in line with the way I’ve hoped to live, with the dedication to green space and community involvement, and I think it’s an easy path for anyone here who makes those things a priority."

One of the day’s distinguished guests was Rep. Gerry Connolly (D-11), who said he has attended many of the Founder’s Day celebrations, but will always remember the first one.

"We celebrated Bob’s 90th birthday and dedicated the statue, and it was a very memorable evening not only because of Bob, but because of the incredible community outpouring of spirit that came out that day," he said. "It really epitomized what a special place Reston is, and in my 18 years of public life, it’s probably the most memorable event I’ve been to."

"I think it’s only appropriate to celebrate what this community has become by recognizing what our students are capable of," said Ed McCay of Reston. "Those kids weren’t even born when this community was put together, but here they are with the people who literally built it, all here for the same thing."

State Sen. Janet Howell (D-32) said she comes every year to "say thank you Bob, you put together a community with your vision and determination against all odds, which has attracted so many people to this community."

After the performances, Simon cut the first slice of his own birthday cake, and was rewarded with everyone in attendance singing "Happy Birthday."