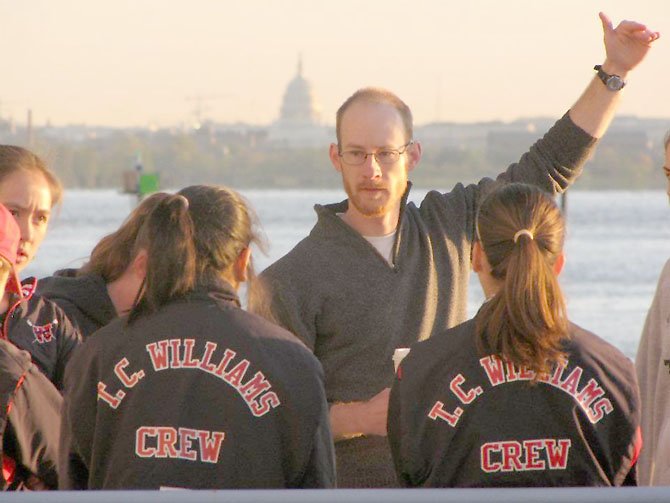 T.C. Williams girls’ coach Pat Marquardt talks to some of his rowers before the start of the time trial and intra-squad scrimmage at the Dee Campbell Boathouse on April 7. Photograph submitted

The T.C. Williams crew team wrapped up a week of two-a-day practices over spring break by holding a time trial and an intra-squad scrimmage on April 7 at the Dee Campbell Boathouse in Old Town.

In the intra-squad scrimmage, which was held immediately following the time trial, rowers from the boys’ and girls’ teams were mixed together in racing shells and then pitted against each other in a head-to-head, single elimination competition. Members of the winning boat included coxswain Brian Comey and rowers Maeve Bradley, Sam Zickar, Gabby Salcedo, Chris Kidd, Perry Connor, Urmana Islam, David Salmons and Lia Niebauer.

On Sunday, April 15, the team will hold its annual car wash fundraiser at Minnie Howard. The car wash will take place from 11:30 a.m. to 5 p.m. and be held in the lower parking lot at the school.