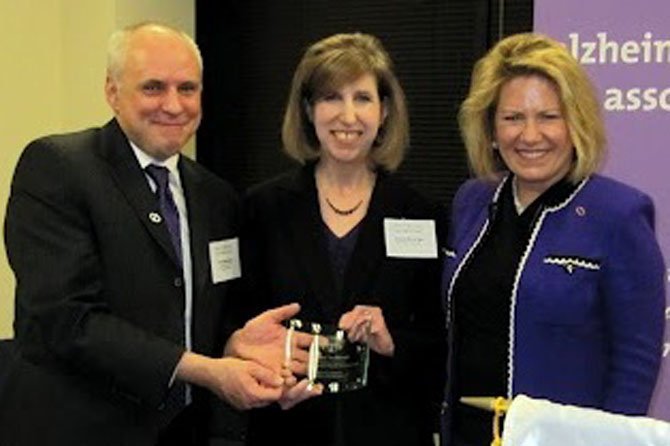 The Alzheimer’s Association National Capital Area Chapter recognized thirteen individuals as Inspiring Champions at a special reception on Feb. 29 at its corporate offices in Fairfax.

The Inspiring Champions Awards program recognizes valuable "above and beyond" contributions of time, talent and resources to the Alzheimer’s Association National Capital Area Chapter. The annual†program also serves to thank and honor volunteers who, by their demonstrated commitment and example, inspire others to engage in volunteer service.

Among the honorees are Fairfax residents Tim and Ilissa Belanger. Tim Belanger, senior project manager at Abacus Technology, is a member of the Chapter’s board of directors and serves on the committees for the Walk to End Alzheimer’s in Northern Virginia and Washington, D.C. Ilissa Belanger, associate director of Career Services at George Mason University School of Law, is the chair of the Walk to End Alzheimer’s in Northern Virginia, which she co-chaired in 2011. She also serves as a committee member for the Walk in Washington, D.C. Thy are active in community outreach and can be found frequently at local grocery stores, Metro stations and other places sharing information about the Alzheimer’s Association and the Walks. They are Alzheimer’s advocates and have spoken at public input sessions regarding the development and implementation of a National Alzheimer’s Plan. They lost their mothers to Alzheimer’s.