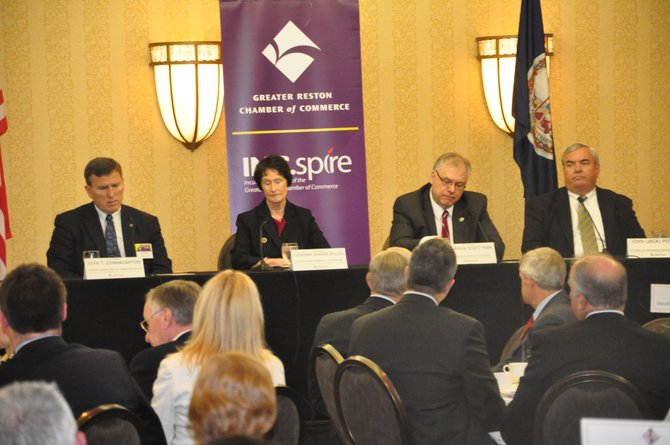 Connaughton said the subject of a Project Labor Agreement, which would put conditions on the companies and employees building the rail, has been a point of contention during the process.

"There’s a great deal of concern that Virginia companies could be excluded from being able to competitively participate in the procurement," he said. "In Virginia, we have some fairly large project going on, the 495 HOT lanes has a PLA on it. But what happens after the procurement is awarded is essentially between those contractors and their employees about how they move the project forward. But the government mandating it up front is something we just did not find acceptable."

Potter said he was confident that MWAA would adapt to changes as needed, and pointed to recent examples.

"The MWAA board has made decisions that I think are indicative that they are listening. They went from a below-ground to aboveground station, there were concerns raised about a mandatory project labor agreement, we worked very hard... to fashion a mandatory PLA that at the time was compliant with Virginia law," Potter said. "It was suggested that a mandatory PLA was not the desire of the commonwealth and the board reacted to that and followed through with a voluntary PLA with incentives."

IN LOUDOUN COUNTY, seven of the nine supervisors are newly elected. The Loudoun board has been given extra time before their vote so their members can get themselves up to speed. York said he hoped that the plan will pass.

"If we fail to invest in this project to get it into Loudoun County then we will not become what we have planned to be in our comprehensive plan," said York, who is in his fourth term as chair. "This is our pipeline to Washington, D.C., to bring employees in, to take our constituents who work all the way in Washington in and out quicker and not have to be stuck in traffic. This is a huge quality of life issue. Yes, it is going to cost us today, but it’s going to cost us a heck of a lot more in future years."

Bulova said that Loudoun’s decision will have an impact on how Fairfax County moves forward.

"I hope that Loudoun County’s decision is positive, they’ve been a partner with us from the beginning of the project," she said. "If that turns out not to be the case we’ll have to go back to the drawing board and look at the project and how things might change. It would be a less expensive project because there would be fewer stations, and the project would not extend all the way into Loudoun, but we’d have to take another look at the funding agreements and the legality of any changes that would need to happen."

"We at MWAA are very hopeful that we’ll be able to take the rail all the way out to Loudoun. Should they opt out, and we hope that would not be the case, we would get together with our partners and look at what options are out there. But we made a commitment, long before I got here, that we were going to take the rail to Loudoun, and that’s my first priority."

MARK INGRAO, president of the chamber, said he and its members remain committed to seeing the Silver Line finished.

"This is one of the most important development projects in this region in decades, and will have lasting implications for years to come," he said. "All the businesses I speak to, who have invested in the special tax district in Reston, believe this project was never intended to be rail to Reston, it was intended to be Rail to Dulles and beyond."

Bulova said Fairfax County is prepared if the Loudoun County Board of Supervisors decide to move forward.

"Assuming that Loudoun indicated their willingness to continue participating in the project, Fairfax County will have this on our April 10 meeting," she said. "Assuming all those positive things happen, we expect to be ready to start negotiating with developers and folks who are interested in partnering with us probably in the summer, starting June or July."