Duo finishes with 30 kills in win over Hayfield 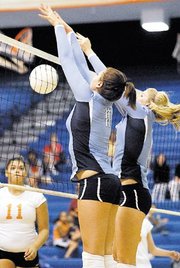 Yorktown’s Elyse Bush (11) and Ashley Rock go up for a block during Thursday’s match against Hayfield. The duo combined for 30 kills in a 3-0 Patriots victory.

Elyse Bush was in typical form, peppering the court — and overmatched members of the Hayfield volleyball team — with authoritative kills.

Ashley Rock also shined on the Yorktown stat sheet, but her performance was the product of placement over power.

Bush and Rock combined for 30 kills against Hayfield on Thursday. But more importantly, the duo’s blend of finesse and ferociousness led the Patriots to a 3-0 (25-15, 25-23, 25-23) victory over the National District newbie, which the Patriots consider their greatest threat to repeating as district champions.

Rock wasn’t pleased with the way she played, but the sophomore’s effort showed how she’s improving. Swinging away wasn’t working for Rock early in the match, so the middle blocker started attacking specific areas by softly tipping the ball over the Hawks’ front row.

"I noticed that spot was always open, so I just put it there," Rock said. "I was hitting at the beginning of the game and I kept getting blocked, so I changed."

Rock, an honorable mention all-district selection as a freshman, finished with 10 kills and was second on the team with 81 after nine matches. Yorktown coach Brittanie Behar said she was pleased Rock’s adjustment against Hayfield.

"I think the big difference with her this year is that she’s really seeing the court well — she’s seeing what the other team is doing and she’s responding really well," Behar said. "As a middle, in that position, you can get a lot of kills off of smart shots. You don’t have to swing away all the time. The smart shots are just as effective — and sometimes just as frustrating for the other team. I like that and I think that it’s one of the things that develop as you get more experience.

BUSH, THE DISTRICT MVP and a first-team all-region selection last season, finished with 20 kills against Hayfield. The senior led Yorktown with 139 kills through nine team matches. She did not play Sept. 21 against Mount Vernon due to illness.

"You dig in for those hard swings and then the little ones you’re just not ready for," Behar said. "I think the balance between the two is really good and I think it keeps the other team on their toes."

Bush and Rock combined for 12 points in game one. Bush put down eight kills, recorded an ace and accounted for five of the team’s first eight points before Rock scored three of the next four.

The duo produced 10 points in game three. Rock gave the Patriots a 24-21 lead with a tip, and Bush closed the match with a kill.

Senior setter Libby Kane was a contributor to the offensive success of Bush and Rock, finishing with 32 assists.

The victory improved Yorktown to 7-2, 3-0 in the National District. The Patriots’ losses came against Westfield and Robinson of the Concorde District.

"We really wanted this," Kane said of the win over Hayfield, adding the Patriots were "worried" when they found out the Hawks were joining the National District. "We didn’t play terribly, but our games against Robinson and Westfield were definitely way better than this."

Yorktown faced Oakton on Tuesday. Results were not available as of press time.